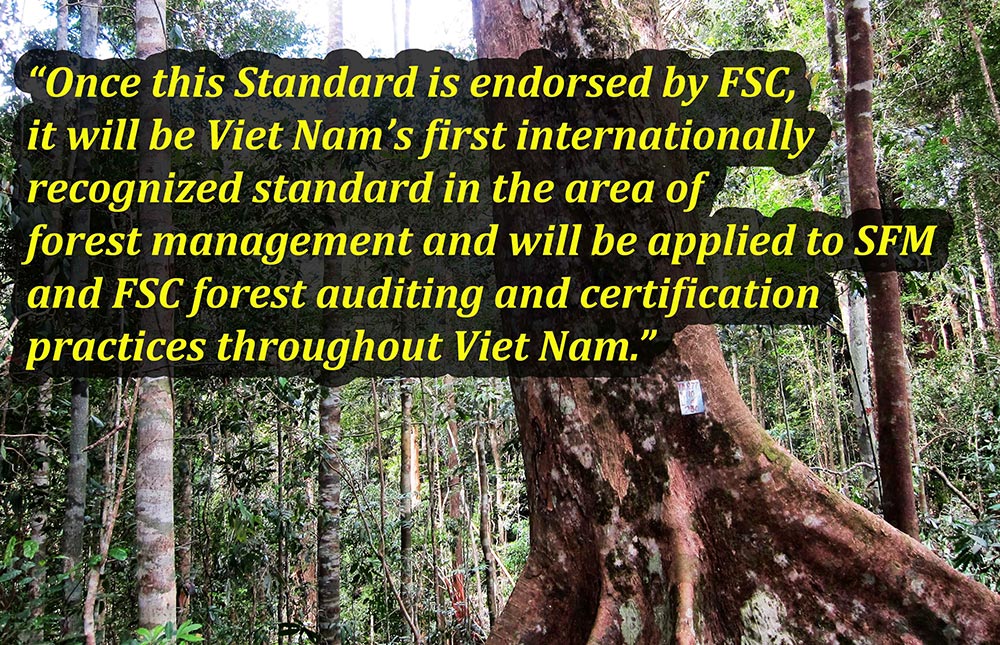 Sustainable forest management (SFM) is one of the priorities on the path to responding to the adverse impacts of climate change. Deforestation and forest degradation are responsible for one sixth (1/6) of carbon dioxide emissions globally, and forests play a key role in mitigating this environmental threat, absorbing one tenth (1/10) of total global carbon emissions.[1] SFM maintains and enhances the carbon-storing capacity of forests and also contributes to their protection.

A forest management (FM) certificate is evidence of forest owners’ SFM practice. Until September 2016, of the 206,183 hectares of forests granted with SFM certificates in Viet Nam, natural forests accounted for 86,193 ha (the total area granted with full FSC FM certificate is 64,790 hectares and the area granted with FSC controlled wood certificate is 19,746 ha and the area of plantation granted with FSC FM certificate is 119,991 hectares[2]. According to Decision 2810/QĐ-BNN-TCLN, dated 16/7/2015 approving an action plan to implement SFM for the 2016-2020 period, Viet Nam aims to have at least 500,000 hectares of SFM-certified production forests by 2020. However, Viet Nam does not yet have internationally endorsed SFM national standards. Therefore, forest owners striving for SFM certification currently have to base their practices on temporary SFM standards employed by international certification bodies. But choosing which standard to apply is a challenge for implementers, and the temporary standards are sometimes complicated and not fully relevant to Viet Nam’s SFM conditions. Given this, an internationally endorsed Viet Nam national standard is of utmost necessity to SFM and forest certification in Viet Nam.

To further push SFM progress in Viet Nam, the FSC-supported project Forest Certification for Ecosystem Services (ForCES) has supported VNFOREST to develop a FSC-based SFM standard in 2013. The working team established to draft Viet Nam’s own FSC standard was officially recognized by the FSC in 2015. It includes experts representing environmental, economic and social aspects originating from NGOs, forest companies, and universities. The projects ForCES and MARD/GIZ Forest Biodiversity are actively supporting the development of a national SFM standard based on International Generic Indicators (IGIs).

Once this Standard is endorsed by FSC, it will be Viet Nam’s first internationally recognized standard in the area of forest management and will be applied to SFM and FSC forest auditing and certification practices throughout Viet Nam.

This standard includes two main parts. Part I covers SFM standards and auditing of forest certification for timber and non-timber forest products, including 10 principles, 64 criteria and about 200 indicators concerning economic, social and environmental aspects. Part II includes annexes, of which the most essential is annex C, covering indicators for the assessment of ecosystem services, including those for (a) All Services; (b) Carbon Sequestration and Storage; (c) Biological Diversity Conservation; (d) Watershed Service; (e) Soil Conservation; and (f) Recreational Services. Ecosystem Services certification is an innovation. If a forest is granted with an additional Part II certificate, the forest owner can gain additional benefits from the forest’s ecosystem service provision.

The second draft of the standard is now available and being finalized. With the support of the ForCES project and the Global Forest and Trade Network (GFTN) Vietnam Programme of WWF, the second version of the SFM standard will be tested in September 2016 at a forestry company in the province of Ha Tinh and household groups in the Province of Quang Tri in order to verify its relevance and practical application potential. The results of the testing process will inform the revision of the standard so as to better suit Vietnamese conditions. After the revision, the MARD/GIZ Forest Biodiversity Project will carry out a third consultation workshop on the standard before the final version is completed and submitted to the FSC for endorsement by the end of 2016.