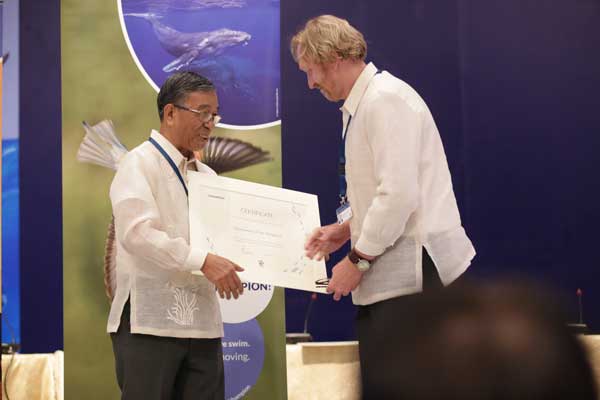 The Philippines has been named as one of the five “migratory species champions” in the world for its exemplary contribution in the global effort to protect migratory animals, particularly the whale shark or butanding.

Also recognized by the Convention on the Conservation of Migratory Species of Wild Animals (CMS) were the city of Abu Dhabi in the United Arab Emirates, the European Commission, Germany and Monaco.

The awarding ceremony, dubbed “Champions’ Night,” was held last Sunday, the eve of the six-day 12th Session of the Conference of Parties to CMS (COP12) happening in Manila from October 23 to 28.

Environment Undersecretary Rodolfo Garcia accepted on behalf of the country the award, which recognizes the Philippines for its efforts to conserve the whale shark (Rhincodon typus).

Garcia, who is also the chief of staff of Environment Secretary Roy A. Cimatu, said the so-called “gentle giants of the sea” has become an important component of the country’s growing wildlife tourism industry, which contributed 8.2 percent to the country’s gross domestic product.

Speaking on behalf of Cimatu, Garcia expressed hope the Philippines and other “champions” will inspire other parties to the CMS to contribute to the global effort to conserve migratory species and their habitats.

The Environment Agency of Abu Dhabi was recognized for its contribution in the conservation of dugongs and their habitats, and the birds of prey in Africa and Eurasia from 2015 to 2019.

“No matter how committed and well-resourced our country may be, long-term conservation of migratory animals can only be achieved by engaging with other countries through international cooperation and closely coordinating conservation activities across each species’ range,” Zamzam said.

The Federal Republic of Germany was honored for reconciling energy sector developments with migratory species conservation. Rita Schwarzelühr-Sutter, parliamentary state secretary at the Federal Ministry for Environment, Nature Conservation, Building and Nuclear Safety, accepted the award on behalf of the German government.

“A holistically sustainable transformation of the energy system can only be achieved if it takes place in harmony with nature. This is why we are fully dedicated to the important work of the CMS Energy Task Force that is working towards that aim,” Sutter said.

Meanwhile, the Principality of Monaco was commended for its commitment to marine species conservation for the years 2018 to 2020.

Launched in 2014, the Migratory Species Champion Program under the CMS is open to governments, companies, organizations and individuals willing to make a financial commitment of at least three years for one or more specific initiatives that fall under the CMS family umbrella.

It offers initiatives that contribute to the implementation of a large program targeting a species, a group of species or a cross-cutting issue. #

As an environmental treaty under the aegis of the United Nations Environment Programme, CMS provides a global platform for the conservation and sustainable use of migratory animals and their habitats. CMS brings together the States through which migratory animals pass, the Range States, and lays the legal foundation for internationally coordinated conservation measures throughout a migratory range. Read more at: www.cms.int/en/legalinstrument/cms