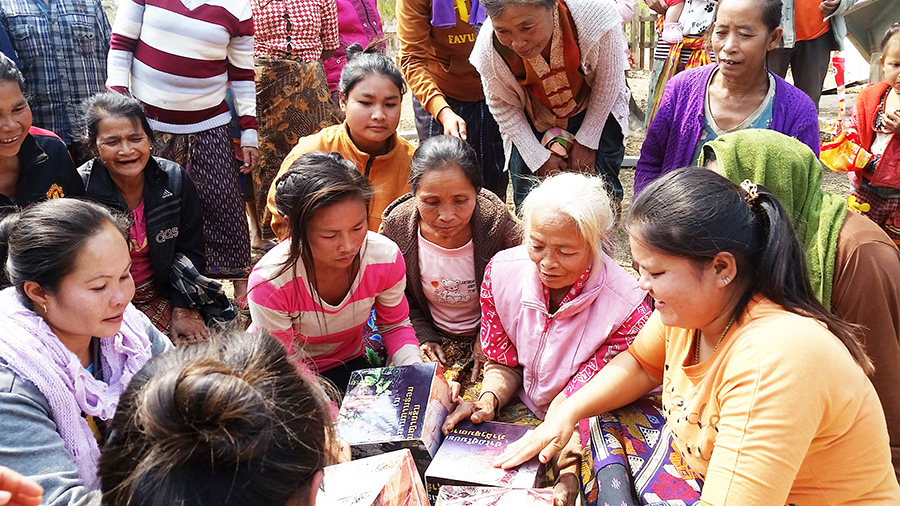 If you are in a remote village in Laos, and see a group of adults playing a puzzle, laughing and competing to see which group is the fastest to set it up or, if you encounter several district level Government authorities playing enthusiastically a memory game, and when you are passing by the village school, you see pupils participating on a puppet theatre play, or when the stars appear on the sky, you see villagers of all ages watching a movie on an open-air cinema, you most probably are in one of the more than 80 villages where ProCEEd implements the environmental education tours.

So, it is not without a reason that pupils and villagers alike, expect with curiosity what ProCEEd is sharing this time, when they see the environmental education tour bus and truck arriving at their village. 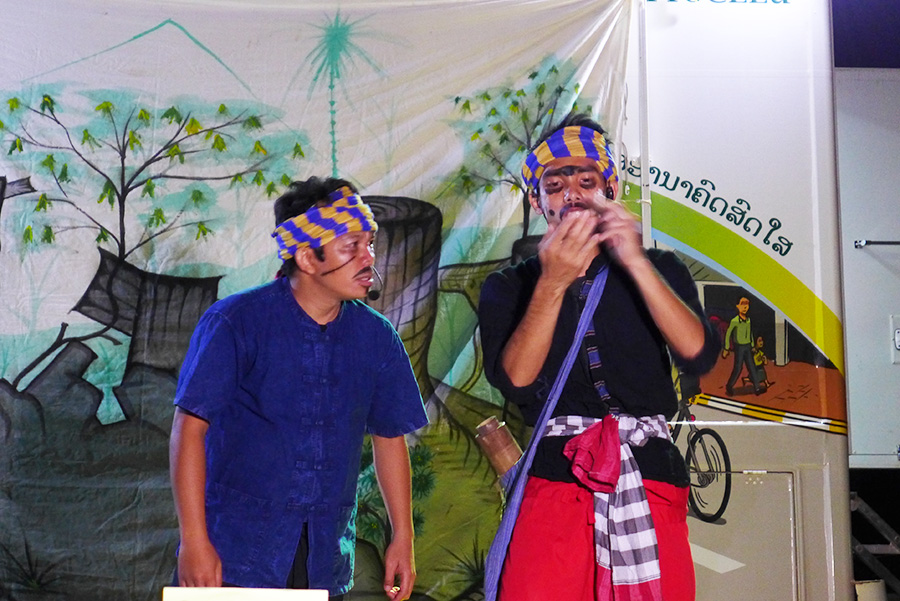 However, if you have a deeper look at these activities, you will easily see that there is a balance between enjoyment and learning. There are clear learning objectives in each one of the games, tolls and shows presented by ProCEEd. While the audience is amused and relaxed, they are also concentrated and motivated, making their learning and sharing about environmental issues more effective.

Each new Environmental Education tour is prepared meticulously. Environmental theatre plays are produced using a great variety of forms such as shadow, people and puppet theatre, or a mix of all.

For each tour, a series of games are developed to respond specific learning objectives, accordantly with the tour environmental topic. ProCEEd games are created mixing technical information, local knowledge and creativity. Often ProCEEd links with local artists to design culturally adapted images used on the games. 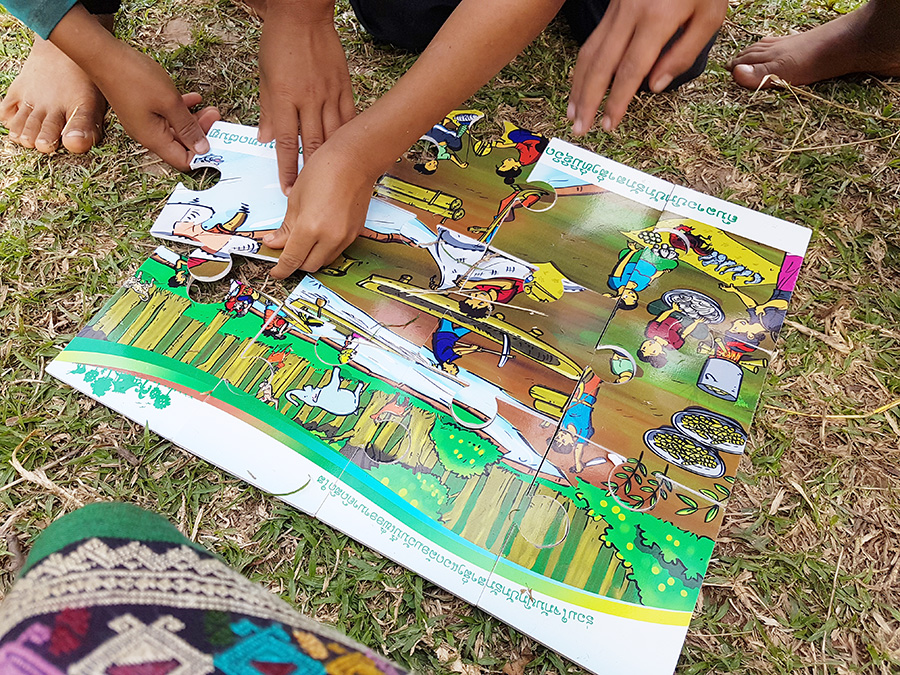 A memory game containing the photos of protected wildlife and information about their biology and threats was used during the tour on wildlife conservation. During the game, the villagers shared their local knowledge about the species presented, and with the help of the game moderators, discussion on the conservation challenges and solutions were presented. The memory game comprised 16 wild animals, found on the tree provinces were the tour went.

For the waste management topic, the game “find the seven differences” was produced. The two A0 size full colour posters, illustrated by a local artist in comic style, presents a common Lao village market area scenario. One poster shows the good behaviour and the second the bad behaviour regarding the production and disposal of waste.  The participants that could identify faster the seven differences won the game. At the same time, a black and white printed version of the posters were distributed to the children for colouring and also marking the differences. This game was used during events on popular festivals in Vientiane province, as well as during the waste management tours. 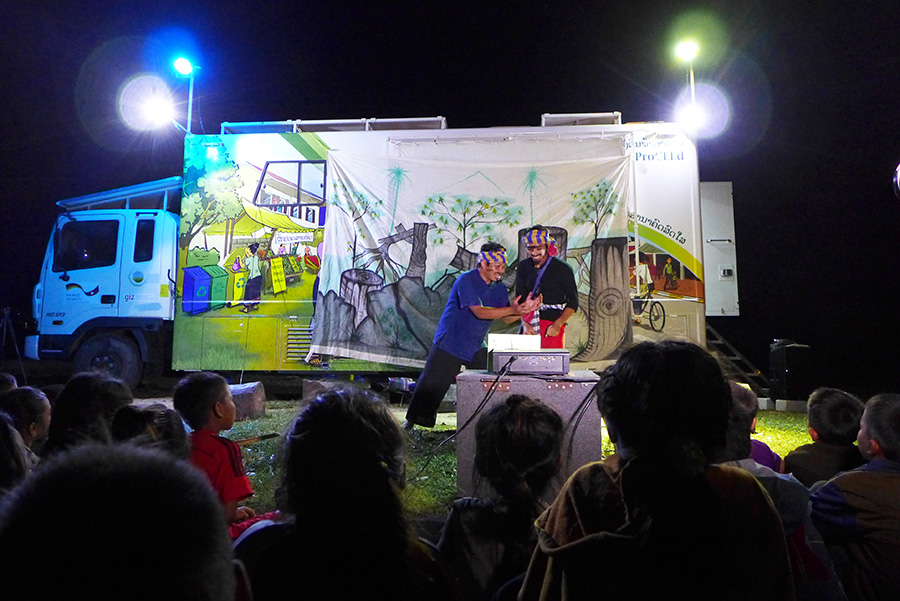 During the wildlife conservation tour, the 10 facts were presented using a series of 10 posters that illustrated the main messages of the tour. To stimulate the participation of the audience, 10 puzzles were created with the same images. The teams competed which can set up faster the puzzle and then had to explain what they saw and what was the message of the illustration. With joy, adults and children participated. And were keen to win. The interpretation of the message of the puzzle was then shared to all participants.

Floor board games of approximately 3m by 3m were also produced and used with success during the tours. On these sort of games, the participants had to stand and move stepping on the game. During the village tours, Doklao, a local civil society organisation that services our Government partner, used the game to ask locally relevant environmental questions to the participants. If the participants knew the answers they could go steps further. If they answered wrong, they had to step back, as indicated on the board.

Villagers and pupils enjoy and are motivated to participate on the educational games during the villages tours activities. The games are also very well received by the local government authorities during the tours targeting the decision makers at the province and district level.

It seems that in Laos there is no difference from other places in the world: we learn more efficiently when we feel happy and relaxed. Playing games helps to foster the participation of even very shy people. And while laughing we can learn a big deal of important things!

ProCEEd continuously develop new games for their environmental education tours and is a space for entertainment and education. While the participants are happy laughing and playing, ProCEEd makes sure that learning and sharing about the environment is going on.

GIZ’s ProCEEd project supports environmental education and communication in Laos in order to increase knowledge on environmental protection, biodiversity and climate change. In the ProCEEd project, GIZ is cooperating with the Department of Environmental Quality Promotion (DEQP) at the Lao Ministry of Natural Resources and Environment. The partners also include the Ministry of Information, Culture and Tourism, as well as other state and civil society organisations, and the mass media. For more information on ProCEEd visit our website: http://www.laos-proceed.com.
Cristina Georgii
Senior Adviser,
Promotion of Climate-related Environmental Education (ProCEEd)
Department of Environmental Quality Promotion,
Ministry of Natural Resources and Environment,
Nahaidiau Rd, Ban Nahaidiau, Chanthabouly District, Vientiane Capital, Lao PDR, P.O. Box 4222