From Trash to Treasure: Transforming a dump site into a thriving eco-park

An old junkyard and a dump site of wastes in Delhi has undergone a massive makeover into a beautiful park within a period of about six months. The once useless plot of the Patpargani Industrial Area, located in the East Delhi district in the National Capital Territory of Delhi, is now an emerging “green lung” for the surrounding community. 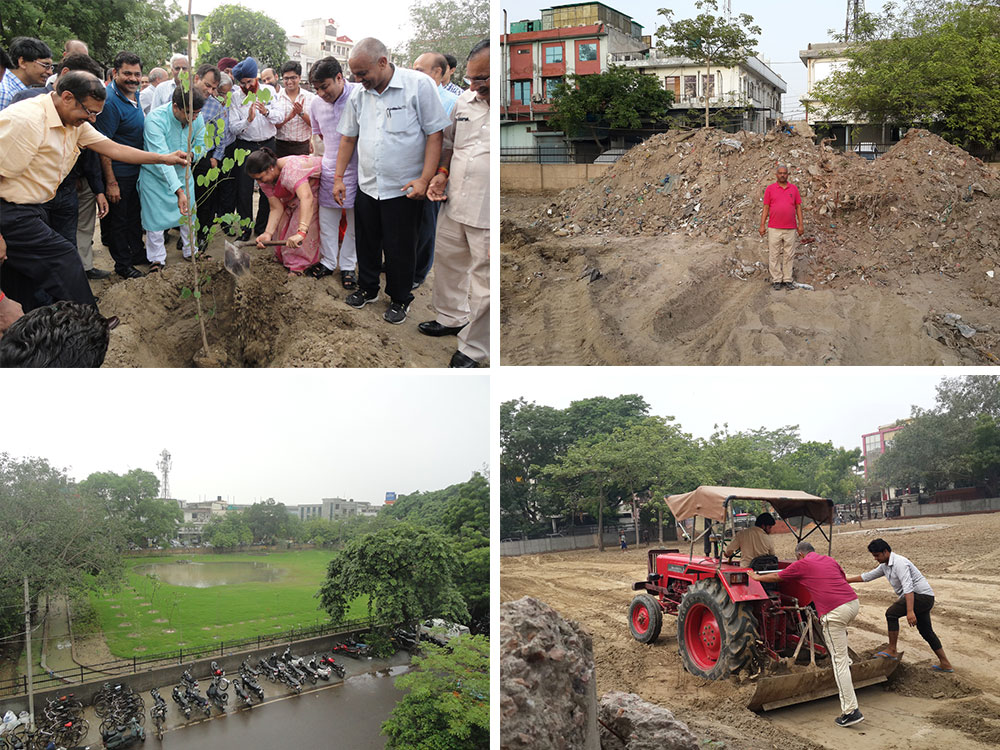 The Patparganj Industrial Area of the Delhi State Industrial Infrastructure Development Corporation Ltd. (DSIIDC) is spread over an area of 134 acres. Housing 600 medium and small scale industries (MSMEs), this industrial area is a buzzing residential neighbourhood of the famous Patparganj. The waste dumps, air pollution from the nearby areas, and the adjacent drain carrying sewage had long been a concern for the industrialists in the area and a large number of group housing societies and many multi-storeyed apartments.

Thanks to the collective efforts of the Patparganj FIE Entrepreneurs Association (PFEA), the industries located in the industrial areas, the support from the Delhi State Industrial Infrastructure Development Corporation Ltd. (DSIIDC) and the momentum generated by the Indo German Development Cooperation project on “Sustainable and Environment-friendly Industrial Production” project, the Patparganj Industrial Area, is on the pathway of improvement.

“Each one of us should plant at least one tree so that we can provide cleaner environment to our future generation”, part of a speech during the environment drive inauguration event in Patparganj Industrial Area, Mr. Ramnibas Goel, Honourable Member of the Delhi Legislative Assembly

On 6th June, 2016, the day after the World Environment Day, PFEA in cooperation with DSIIDC and the team of the GIZ India working on the “Sustainable and Environment-friendly Industrial Production” project, launched the month-long Environment Improvement Drive in the Patparganj Industrial Area. The event kick-started with a token tree plantation in the park by Mr. Ramnivas Goel, Honourable Member of the Delhi Legislative Assembly from Shahdara Constituency of Delhi, who was present as the chief guest.  PFEA took lead and continued the effort in a mission mode to transform the junkyard. The construction debris and solid waste dumped for years in the park, which was of some 1,375 tonnes, was first removed. Then, the soil in the park was levelled, fresh soil and manure were added to the park and plantation was started.

“We are thankful to DSIIDC and GIZ for their cooperation and motivating us to take up the Environment Improvement Drive. We will have more such drives in the future and many more activities in the pipeline, and step by step, we are confident to make Patparganj Industrial Area into a role model for other industrial areas in Delhi to follow!”
Mr. Sanjay Gaur, President, PFEA

“By protecting of restoring environment we are not doing any great service to society. It’s our moral duty to handover quality of air, water and land which we got from our parents and to our children if we really love and care for our children.”
Mr. S.K. Maheshwari, General Secretary, PFEA on the redevelopment of the park

After the successful plantation drive, continuous efforts were made to protect these saplings to ensure their maximum survival. Eventually, saplings planted during July to August 2016 have started growing into trees. The variety of growing trees include Harsringar, Semal, Kurejia, Raat ki rani, Madhumalati etc. and are gracefully transforming the landscape of the place and are bringing in fresh air to the old thinking and habits of the industries in the area.  The trees chosen bear flowers for most of the year and will surely add beauty to the area.

Additionally, bamboo trees and other tall trees were planted to give shelter to the birds and squirrels that are abundant in the area. A pond has been developed in the park merging into the landscape, designed to harvest rainwater through a natural slope provided within the park. Care has been taken to prevent rainwater from the surroundings, which may carry pollutants enroute, from entering the park. The pond, after good rains this year, has at one point had about a million litres of water in it! Hopefully, this also helps to recharge ground water, which has already depleted to 48-50 metres and has very high hardness with total dissolved solids of 7,000 to 9,000 ppm.

“Previously, there was no park, only a dump yard was there. The whole industrial area used to dump garbage here. The dump yard breeds lots of mosquitoes and other insects. We had no place to rest during our work breaks. Now the park is a nice place and we can use it as a sitting area during the break”.

The Result: From Trash to Treasure

The amazing transformation of the open ground with waste dumps into a beautiful park was accomplished by December 2016. This park adds scenic beauty to the neighbourhood and provides a place where the industrial workers and many of our winged friends come to relax!