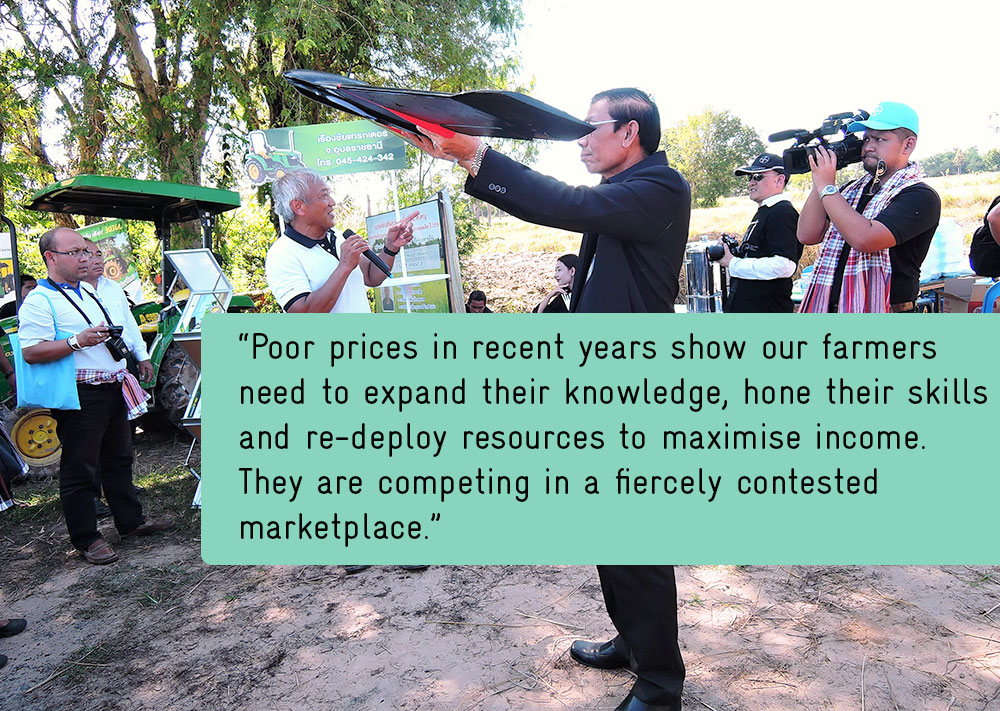 A solution to lift Thai rice farmers out of a low-income trap has edged closer to reality with a German-Thai rice programme that showed “great promise” in the Northeast, the heartland of jasmine rice.

In Ubon Ratchathani province with 4.2 |million rai under “khao hom mali” (jasmine rice) cultivation, farmers at the pilot project |in Baan Bua Thein said at the weekend that |they have reduced costs for planting by 20 |per cent while raising yields by another 20 per cent.

“Such achievements mean a sizeable chunk in earnings in a sector that’s hard hit by low rice prices this year,” said Apichart Pongsrihadulchai, a key architect of the BRIA (Better Rice Initiative for Asia) project backed by Thailand and Germany.

BRIA encourages the use of new technology, including drones. One drone with sensors for capturing data on crop conditions was used in Ubon, monitoring 1,000 rai of rice fields within 15 minutes.

Such data tells farmers when crops are ripe as harvesting must be done quickly to prevent crops from becoming spoiled. It also alerts planters if crops are affected by disease.

Thailand is viewed as the shining star among participating Asean nations including Vietnam, Philippines and Indonesia.

Poor prices in recent years show our farmers need to expand their knowledge, hone their skills and re-deploy resources to maximise income. They are competing in a fiercely contested marketplace,” said Apichart, a former vice minister for agriculture who, with 50 years in the industry, is often referred to a “rice guru”.

“Economical fertiliser usage can cut costs while raising yields. This approach will be used in three other key jasmine rice provinces such as Roi Et, Surin and Si Sa Ket,” he said.

Along with Ubon, they have a combined 13 million rai of jasmine rice. 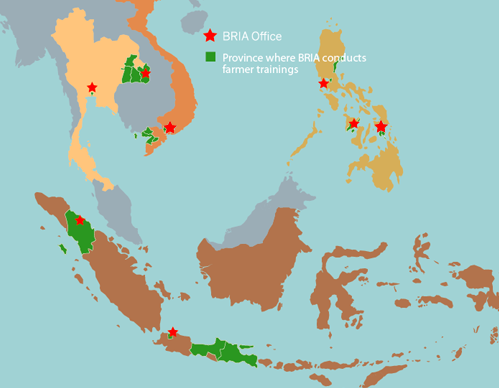 The aromatic rice fetches the highest price among rice grains, now at about Bt8 a kilo, down from Bt10 last year.

Krishnapong Sripongpankul, director of rice product development at the Agriculture and Cooperatives Ministry’s Rice Department, said BRIA was started two years ago and now shows great promise.
“We are constantly developing better rice strains that are uniquely Thai. The aim is to look at the welfare of our farmers,” he added.

Evidence of rice cultivation in Thailand spans more than 4,000 years to Ban Chiang, a Bronze Age settlement where rice grains were uncovered by archaeologists.

Rice is grown by 70 per cent of the Kingdom’s population and is the second most valuable crop after rubber. Thailand commands 21 per cent of the world’s rice export market worth US$24 billion in 2015.
Simon-Thorsten Wiebusch, Bayer Group’s Southeast Asia head, said his firm is a strong backer of BRIA. “The hope is it brings prosperity to a depressed segment of Thai society,” he said.

“The low rice price situation is a tragedy as it forces many farmers to sell their land when they cannot repay debt,” he noted.

“But such a crisis teaches farmers to recognise reality where prices cannot be guaranteed. Government buyback schemes also have their limits.

“BRIA encourages them to improve farming techniques as well as prepare contingency plans to hedge against a shortfall in prices.”

“Thai rice is unbeatable when it comes to high grade sake,” he added.

GIZ, a German assistance agency, is also a key supporter of BRIA.

Vietnam’s rise as a rice exporter is not without challenges, rice experts said. A number of rice shipments to the US and Europe had been rejected due to their breaching “maximum residual levels” or MRL, when inspected during quarantines at the ports.

MRL levels refer to the amount of chemical or pesticide used. If they exceed safety levels, they will be turned back.

Rice exporters in Thailand learn from such cases and are now in full compliance with safety and transparency requirements of respective import nations, Apichart said.