Collaboration between CTI-CFF and GIZ Concerning the Sulu-Sulawesi Seascape 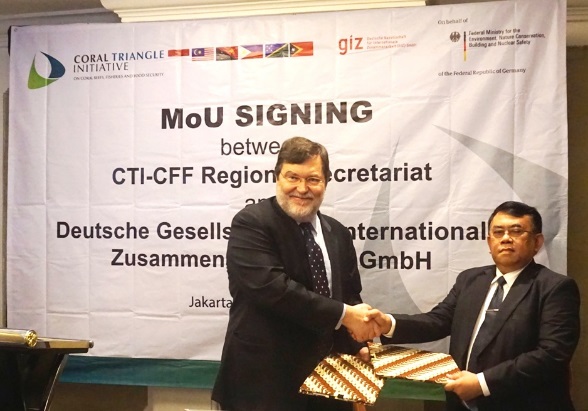 Jakarta,  3 March 2016 – The Coral Triangle Initiative on Coral Reefs, Fisheries and Food Security (CTI-CFF) and Deutsche Gesellschaft für Internationale Zusammenarbeit (GIZ) GmbH signed a Memorandum of Understanding (MoU) declaring their mutual interest in addressing the urgent threats faced by the coastal and marine resources of the Coral Triangle. The common goal is to improve the management of natural resources in the Sulu-Sulawesi Seascape, a priority seascape of CTI-CFF, by developing and strengthening systems, institutions, and individuals concerned. The MoU provides a framework for cooperation between CTI-CFF and its member countries and GIZ. Ms Franca Sprong, director of the Sulu-Sulawesi Seascape project, underlined the importance for the CTI-CFF member countries to strengthen their collaboration which this liaison intends to support.

The Sulu-Sulawesi Seascape project (former SSME project) is supporting the three Sulu-Sulawesi Seascape countries Indonesia, Malaysia and the Philippines since 2012 in better coordinating their activities with a budget of 7 million Euros. CTI-CFF is an initiative founded and funded by the six Coral Triangle countries Indonesia, Malaysia, Papua New Guinea, the Philippines, the Solomon Islands, and Timor-Leste.