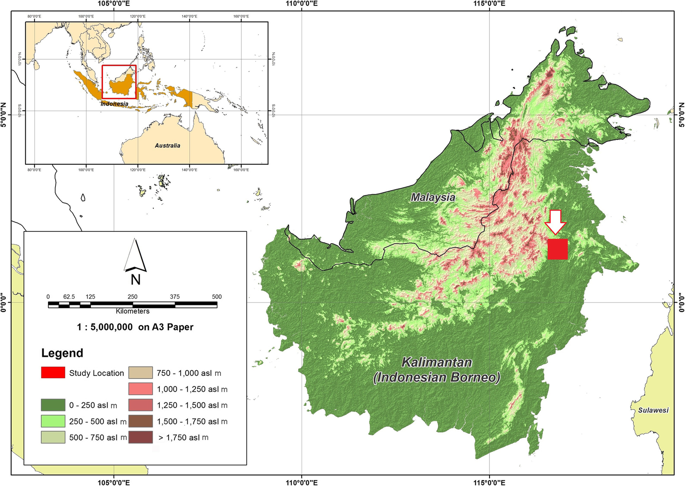 The knowledge gap regarding post-logging carbon recovery by increased growth is becoming more crucial to understand the significant contribution of forest to climate change mitigation. We assessed the ability of tropical forests in Indonesia to recover carbon following conventional logging. We evaluated carbon re-growth of 10,415 trees in permanent sample plots (PSPs) in East Kalimantan. Four different post-harvesting silvicultural treatments including liberation, refining, thinning, and control were applied in the PSPs. We estimated the carbon recovery period using three different scenarios of total carbon losses due to logging. In the first scenario, we used an existing factor of logging damage and increased it for assuming the range of carbon losses due to different logging practices.

Under the existing conventional logging practice, the concession annually emits 51.18 tC∙ha− 1, of which 16.8% are extracted from the forest as raw timber, 38% are logging losses, and 45.2% are emissions due to infrastructure development for logging operation. Increasing the logging damage factor two and three times led to an increase in carbon emission to 70.76 and 90.34 tC∙ha− 1, respectively. The recovery time of the aboveground carbon is 26 years in Scenario 1, 36 years in Scenario 2, and 46 years in Scenario 3. We found no significant effect of the silvicultural treatment type on carbon recovery, but significant effect of the sites was observed.

We found that the time taken to restore the carbon to the level found in undisturbed forests is considerably longer than the current intervention cycles. The time needed to recover biomass and carbon-stock noticeably depends on the intensity of logging interventions, demonstrating the benefits of using improved harvesting e.g., reduced impact logging to reduce emissions. The study found that site variability has a significant effect on the carbon recovery time. Different silvicultural treatments, on the other hand, have no effect on the recovery time. The study suggests that it is not appropriate to establish an intervention cycle based on arbitrary choice; the time between interventions must be based on logging losses and site specific growth potential to ensure sustainable management of forests.

Human-induced disturbances in tropical forests contribute 8%–15% to global greenhouse gas (GHG) emissions (Houghton et al. 2015), with gross tropical deforestation emission of 2.9 ± 0.5 Gt C∙year− 1 and compensation by regrowth of 1.6 ± 0.5 Gt C∙year− 1. However, the role of forest degradation by disturbances is also considered to be significant. Emissions by forest degradation, though varying from region to region, is dominated by emissions from timber harvesting and wood fuel (Köhl et al. 2015). Pearson et al. (2017) estimated total annual emissions of 2.1 Gt C of carbon dioxide (CO2) from forest degradation, of which 53% came from timber harvest, 30% from wood fuel harvest, and 17% from forest fires. With the continuous expansion of selective logging (Blanc et al. 2009), the carbon emission from degradation will be more significant in the dynamic carbon of forests. In 2010, around 403 million hectares (ha) of tropical forests were managed under selective logging, and around 183 million ha were managed with a management plan (Blaser et al. 2011).

While the emissions of forest management and respective carbon accounting systems have often been discussed, the ability of forests to recover biomass and carbon after logging interventions has not received much attention. Carbon fluxes from tropical deforestation and regrowth are subject to high uncertainties (DeFries et al. 2002; Sierra et al. 2012). Pan et al. (2011) estimated the re-growing of tropical forests to be about 1.65 ± 0.71 Gt C∙year− 1. Several studies showed an increase in the growth of carbon in logged compared to non-logged forests (Chapman and Chapman 1997; Pélissier et al. 1998; Bischoff et al. 2005; Berry et al. 2010; Mazzei et al. 2010; Hawthorne et al. 2012; Gourlet-Fleury et al. 2013). The reasons for this increase in growth vary. The volume of timber extracted and the level of disturbance or the intensity of logging have an impact on the rate of recovery in such a way that growth has slowed down with increased magnitude of disturbances (Chapman and Chapman 1997; Pena-Claros et al. 2008; Villegas et al. 2009; Bonnell et al. 2011; Sist et al. 2014; Vidal et al. 2016). Post-silvicultural treatment, including the integration of sustainable harvesting practices such as the implementation of reduce impact logging (RIL), is reported to show a positive impact on C-recovery (de Graaf et al. 1999; Priyadi et al. 2005; Pena-Claros et al. 2008; Villegas et al. 2009; Gourlet-Fleury et al. 2013).

Information about the ability of tropical forests to regrow after logging interventions is crucial to understand the contribution of tropical forest management practices to the global carbon budget and its consideration under Reducing Emissions from Deforestation and Forest Degradation in developing countries (REDD+) mechanism. Considerable uncertainty remains about the rate of biomass recovery in secondary forests and the influence of prior interventions on recent recovery rates (Poorter et al. 2016). Forests are widely recognized as a source of renewable resources, and the use of wood is considered carbon-neutral. However, this assumption only applies if the amount of carbon removed by timber harvesting from the forest C-pool is compensated by timber growth processes. Hence, the decisive questions are how a forest grows after interventions and how much time is needed at given growth to compensate for carbon losses of the remaining stand. We are referring to the change in carbon due to timber growth which includes diameter growth of the survivor trees, ingrowth and mortality.