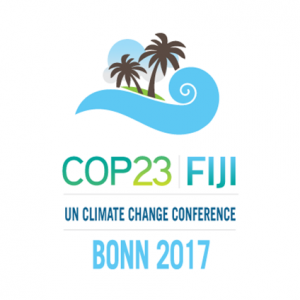 This is the text of the Prime Minister’s opening address at the Petersberg Climate Dialogue in Berlin – a conference hosted by the German Government and attended by senior representatives of more than 40 countries. The Petersberg Dialogue is one of the most important climate conferences in the world and was a vital prelude to the historic Paris Agreement on climate change at the end of 2015. The PM is playing a major role as the incoming President of COP23, the ongoing UN climate negotiations. In his speech, the PM says the entire world is “in the same canoe” when it comes to experiencing the impacts of climate change and addressing the crisis is only possible with the participation of every nation and all global citizens.

Bula vinaka and a very good morning to you all.

It is a wonderful privilege for me to be in Berlin – the great capital of Germany – for this very important event – the 8th Petersberg Climate Dialogue.

This Dialogue has become a regular feature of international climate diplomacy. And I attached the highest importance to it as the incoming president of COP-23.

The Petersberg Dialogue was a critical path to the historic agreement we all reach in Paris at the end of 2015. And I want to congratulate and thank the German Government and particularly Chancellor Merkel for her vision and leadership of our collective effort to advance the range of responses to climate change that we all know need to be made.

After further success in Marrakesh, we are now into the implementation phase. Which is why the theme of this dialogue is so appropriate – working together on solutions. Because as I keep saying at every opportunity, only by the entire world coming together as one to address the impacts of climate change can we effectively tackle this crisis. One that affects every person on earth and especially those in vulnerable countries like Fiji.

Fiji would not be able to give voice to the most vulnerable as president of this process without the help of Germany. Indeed, the combination of Europe’s largest economy and a small island developing state like Fiji, is symbolic of the kind of cooperation that we need to succeed. It is a partnership rooted in the firm belief of both our nations that the fates of the developed and developing world are inter-connected.

To put it simply, we are all in the same canoe together. And the sooner that idea takes root around the world, the sooner we can provide hope and security for our own children and succeeding generations.

Today is all about dialogue – the Petersberg Dialogue. And we have our own name for this process. We call it Talanoa and we intend to bring it to COP23 Fiji in Bonn. Along with the Bula spirit and Fijian culture that has made our nation famous.

Talanoa is the Pacific concept of a process of inclusive, participatory and transparent dialogue that builds empathy and leads to decision making for the collective good. It is not about finger pointing and laying blame. It is about genuinely listening to each other, learning from each other, sharing stories, skills and experiences. And we are convinced that this very Pacific process will help us all work together on solutions – as your theme so appropriately highlights.

As I said in Bonn on Thursday, I intend as incoming President to do the following: To work with Morocco to design the process for the Facilitative Dialogue of 2018 in Poland. And to work with Poland to ensure its success.

I also commit to making demonstrable progress on the implementation guidelines of the Paris Agreement. And to advance all other aspects of our collective effort across a broad front. Whether it is increasing the take-up of renewable energy, providing affordable insurance for those who are most vulnerable or boosting the development of sustainable agriculture. All the while focusing on the impact of climate change and the urgent necessity to strive towards remaining within the 1.5 degree Celsius boundary.

We understand that at COP23, there is a formal and informal process. And I have made it a large part of my mission as incoming president to ensure that we bring together governments at every level and the people they govern, whether it is the private sector, civil society or ordinary men and women across the world. So in Bonn I will be dividing my time between what we are calling the Bula Zone – the formal negotiations – and the Bonn Zone – which is where much of the action will be. And where we can encourage the non-state actors to further initiatives that connect the global and the local.

Excellencies, while I have said that I will be president for everyone, it is only natural given the part of the world I come from, that we want to see climate action in the Pacific. We have a particular interest in our oceans and seas because they are our lifeblood.

Rising sea levels, as well as ocean acidity and warmer waters have a direct effect on our reefs and fish stocks and the prosperity of our coastal communities. So oceans and climate change aren’t separate. They are interlinked. A point that I will be making very strongly in June when I co-chair – with Sweden – the World Oceans Summit in New York.

I will also be emphasising as the year unfolds the absolute imperative of a technological and business transformation that can make the economic lives of our people better, while at the same time, reducing emissions. We are excited by some of the advances in renewable energy, battery storage, electric vehicles and other innovations. And the challenge is to take these innovations and scale them up so that they can become more accessible around the world.

Excellencies, I want to close with an expression of thanks on behalf of every Fijian for the support of the German Government, for the companionship and solidarity of those of you gathered here to seek solutions by working together and to commit to playing my part as your president.

I said in Bonn during the week that I wanted to be a peoples’ president and I meant it. And in this process, I know that I draw my power from you. It is the power of collective wisdom, and with it, I am certain we will succeed.