The Turtle Islands in Tawi-Tawi, Philippines is a critical nesting area of turtles in a marine corridor encompassing the Philippines, Malaysia and Indonesia found in the Coral Triangle.   The connectivity of marine turtles as well as other marine organisms is vital to the Coral Triangle which has the world’s highest marine biodiversity.  However, both anthropogenic and natural disturbances including climate change threaten its ecological and economic significance.  This paper presents three tools that were used to assess vulnerability of Turtle Islands.  The Coastal Integrity Vulnerability Assessment Tool (CIVAT), the Tool for Understanding Resilience of Fisheries (TURF), and the Integrated Coastal Integrity,  Sensitivity, Exposure, Adaptation to Climate Change (ICSEACC) were used to evaluate the vulnerability of Turtle Island’s physical coast, coastal habitats, fisheries, and communities to sea-level rise. Determination of the vulnerability indices was carried out using the largely participatory and interview type of scoring in the 3 tools. 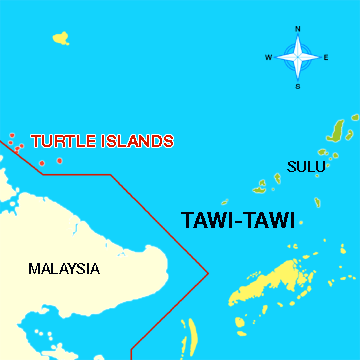 Results showed that all islands (Boaan, Lihiman, Great Bakunggan, Taganak, Baguan, Langaan) have high exposure to sea level rise.  In CIVAT, erosion in the islands through natural processes (e.g. unvegetated coastal plains, degraded reef habitats) will be exacerbated by non-observance of easement guidelines at beaches.  In TURF, most islands had high vulnerability index due to low and medium catch rates, increasing dependency on the fisheries, and lack of alternative livelihoods to fishers requiring immediate attention for the well-being of the island communities in the long term planning. For the ICSEACC, all components (biodiversity, fisheries and coastal integrity) were integrated and except for Baguan, most islands showed high vulnerability.  This was attributed more to the lack of adaptive capacity than the state of sensitivity of the island ecosystems to reduce vulnerability.  The uninhabited Baguan Island is a protected area where settlement and extraction of resources are not allowed so to allow nesting of turtles among others.  From this premise, the other islands especially Taganak and Great Bakunggan need immediate management intervention to augment the capacity of the ecological and social systems to adapt to climate change.