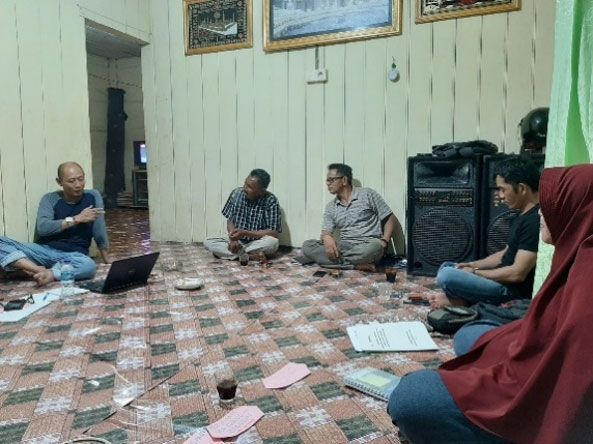 Background
The Delta Kayan Sembakung is an area with high biodiversity and natural resources utilized by the community. The delta has various type of ecosystems which include peat and mangrove. The peat and mangrove are connected, and this condition make the peat in this area quite unique since it receives the material from the sea, river and mineral soil adjacent to the ecosystem. The Provincial Government of North Kalimantan acknowledge the delta as important point in supporting the sustainable development and stated in their Mid-Term Development Planning. The local universities, supported by GIZ – Peatland Management and Rehabilitation Project, initiated a study to obtain socio economic baseline of the villages within and surroundings of the delta.
The delta ecosystem is facing the degradation mostly due to anthropogenic activities. In fact, land use change has become major threat to the delta ecosystem, where peat converted into and mangrove transformed into shrimp pond. These land conversion practices will affect the community as natural resources user. It may contribute to the local community vulnerability from the social and economic aspect and lead to increased poverty. Following this issue, socio-economic baseline study in Delta Kayan Sembakung had taken place on November – December 2020 to identify the attributes affecting community well-being based on the current state of the delta.

Method
The study was conducted in 22 villages of 3 districts namely Bulungan, Tana Tidung, Nunukan which assessed 2005 respondents. The study area is dominated by Tidung which is indigenous tribe in North Kalimantan. The study applied Nested Sphere of Poverty (NESP) developed by CIFOR. NESP is a multidimensional approach to measure and monitor the wellbeing and poverty. It provides broader point of view in understanding poverty or wellbeing that allow the government to have better planning and strategy in managing public service. We adopt the indicator of 9 dimensions in order to capture local context. The survey collected information on household structure, knowledge of peat and mangrove ecosystem as well as its utilization and management, and community access to basic need. The condition to indicate the NESP sphere were divided into three colour groups: green for good, yellow for intermediate, and red for critical.

Result and Discussion
The subjective wellbeing in the delta is at good state and supported by the core environment that are health, knowledge and material wealth. Subjective wellbeing is the core and influenced by personal feeling in other word this dimension is highly individual and emotional (Gönner et al. 2007). In term of health, the villages have access to medical service especially for delivery. The respondents are in intermediate state of material wealth, only 20% of the respondent possess house under the standard while other already equipped with motorbike, television, refrigerator and toilet. Knowledge sphere is in a good state even almost 70% respondents has limited skill of farming and fishing.

The economic sphere is in intermediate condition while some villages have critical economic condition. The respondents mostly are natural resources dependent user, they make a living from fishing, crab harvesting, and collecting non-timber forest products. Village with critical economic condition is affected by having only one source of income and categorized as variable income due to uncertainty amount and frequency.

However, in the social sphere all the villages are in the good state showed by high percentage of trust among community member with no differentiation of religion or race. The social capital is vital asset for poverty alleviation. In addition, social capital accrues to numerous positive socioeconomic outcomes, especially poverty reduction in developing countries (Islam&Alam 2018). The political dimension showed intermediate state with only two villages have critical state. This is due to exclusion of local community during the decision making in village level and ignorance of local regulation by the its own community members.

Natural sphere is in intermediate state where for the last 12 year the respondents said never experience natural hazard such as flood, landslide and pest attack. However, they realize that the environment around the village is heavily degraded. Some villages with critical condition fight to get access to clean water since their water sources are polluted and illegal logging still occurred.
These critical conditions in each dimension could be a sign for the government agencies to further analyse and identify the problem root. In the end proper strategy and policy could be developed to cope the problem as well as alleviate poverty line.