Understanding Mangroves: A step towards preservation 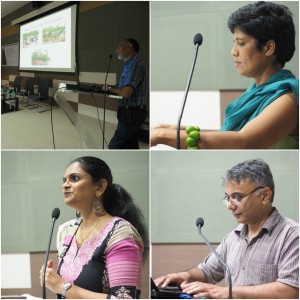 ‘Understanding Mangroves: A high school teachers training on Mangroves and their significance’ was organised by Centre for Environment Education (CEE) at the Sanskruti Bhavan, Panaji, recently. “Forty schools from Bicholim, Tiswadi and Bardez participated in the three-day long training programme. The training focused on imparting deeper understanding about mangroves and their benefits so that teachers can then teach their students effectively.

“We aimed to train teachers so that they can teach their students and also impart practical knowledge by taking the students on excursions to these protected mangroves,” said scientist, Centre for Environment Education, Sujeetkumar Dongre.

Deputy conservator of forests, wildlife and eco-tourism, North Goa, Anil Kumar introduced the topic and gave a deeper insight of the programme. He explained how important the mangroves are to the ecology and the roles they play in maintaining ecological balance. He went on to explain the wide variety of the mangroves and the organisms living in them.

In Goa mangroves are found along seven estuaries – Mandovi, Zuari, Chapora, Terekhol, Galgibaga and Cumbarjua spreading over an area of 28 square kilometres. “The mangroves have a significant role to play as they foster ecological services of soil formation, shoreline formation and stabilisation of shores to prevent erosion acting as a natural barrier,” Kumar said. Giving an example referring to the Chorao Island which is surrounded by mangrove vegetation he said: “If the mangroves along the Chorao Island are removed and there happens to be any cyclone or wind storm the Chorao village will be largely affected. As of now the mangroves act as a coastal protection or natural barriers against wind and water.” 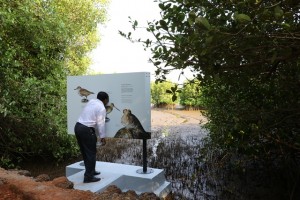 Mangroves are breeding and feeding grounds for different animals, insects, amphibians, birds, organisms and even reptiles that find the roots and area suitable as a habitat. Some of the commonly available species of fauna found here include the fiddler crab, mud skipper, mugger (crocodile), little cormorant, white throated kingfisher, heron and many more. Kumar further added: “The mangroves play an important role in pollution control as these areas act as natures filtering system.”

Dongre explaining the mangrove food web said: “The sun’s energy is used by the mangroves through the process of photosynthesis, dead leaves are shed in the water and serve as food to small organisms, the larger organisms like mud crabs, shellfish consume these smaller organisms lastly these larger organisms are either consumed by humans or birds, its like a vicious cycle that goes on and on.” Dongre also stressed on the importance of conservation and the uniqueness of these areas. He focused on the need to preserve and protect them as they have a significant role to play in the ecology.

Technical advisor of the Conservation and Sustainable Management of Coastal and Marine Protected Areas (CMPA), Aaron Lobo further explained the topic in greater detail. He explained the idea of marine protected areas which are free from human activities. “If we encourage marine protected areas it will in turn increase the breeding of fish in that particular area, later this will also benefit the fishing community and locals,” said Lobo. 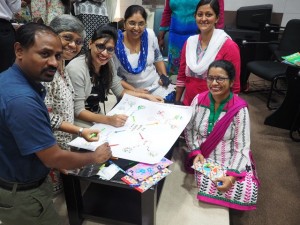 Lobo further said that few strategies like participatory conservation by locals or other bodies and effective communication through use of media etc could be used to preserve these areas.

Sanita Sivadas of National Institute of Oceanography revealed some lesser known facts about ‘Mangrove fauna – associated invertebrate fauna’. In her session she explained the types of invertebrate diversity prevalent in the mangrove areas from plankton (floating organisms) to bentos (associated sediments) and zooplankton (example: jellyfish).

The training included a field visit to Dr Salim Ali Bird Sanctuary, Chorao and several other sessions revolving around the central theme of ‘understanding mangroves’ in a greater depth.

From: “The Navhind Times: Understanding Mangroves: A step towards preservation”
—Aug. 10, 2016

The CMPA project is part of the International Climate Initiative (IKI). The German Federal Ministry for the Environment, Nature Conservation, Building and Nuclear Safety (BMUB) supports this initiative on the basis of a decision adopted by the German Bundestag. The CMPA project is implemented by the Ministry of Environment, Forest and Climate Change (MoEFCC), Government of India, and the Deutsche Gesellschaft für Internationale Zusammenarbeit (GIZ) GmbH on behalf of BMUB. Learn more about the project here. Or visit, the Indo-German Biodiversity Programme for more details: http://www.indo-germanbiodiversity.com/index.html