Watch a recap of key happenings within the world of Sector Networks via this short video! 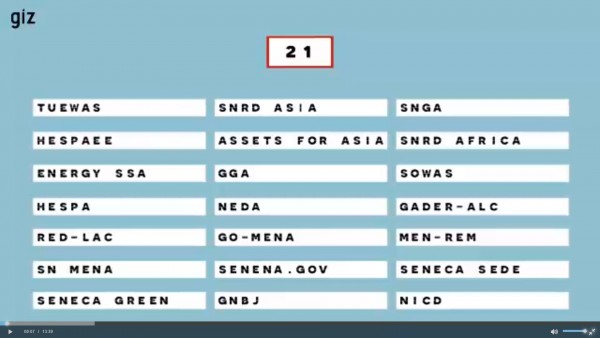 By end of the year, it has become a good tradition to inform about the work of the GIZ Sector Networks. For this purpose, the SN Coordination Team based in the Portal for Internal Customers invited to the 3rd edition of the so called Best of Sector Networks expert talk. This year’s event on December 15th was held in English for the first time and transmitted via live streaming from Eschborn companywide to all other GIZ locations.

Regardless of whether someone attended the event live in the auditorium in Eschborn or via  computer, the approximately 250 participants were first taken on a Discovery Tour through the Sector Networks. This film shows a selection of SN activities and outcomes of 2017. By watching six video clips you travel around the world in very short time and get in touch with members of eight Sector Networks from different regions and sectors. Pictures of the project work on the spot as well as of the tools in use illustrate very nicely that the activities have been conducted from colleagues for colleagues and bring benefits for their projects.

“This film is easily accessible everywhere, so that the presented tools will hopefully be even better known and used more often in future. At the same time, they should inspire as many colleagues as possible to cooperate on all technical questions with their specific Sector Network.”, said Christoph Bönig from the SN Coordination Team.

Before this video will be presented again at other GIZ events in the future, the film premiere was followed by an interesting panel discussion. Four representatives of Sector Networks presented in the film, namely Anna-Sophie Voellmecke, Dr. Petra Mutlu, Dieter Kattermann and Dr. Astrid Michels, gave further insights into their activities and explained their broader context. Questions from the audience and the viewers worldwide contributed substantially to the discussion.

→ To see the “SN discovery tour – selection of activities and outcomes of 2017” video, click here.