Enthusiastic applause and bravos rewarded the young team of the Mobile Conservation Unit (MCU) for a great theatre performance and their effort and commitment at the end of a seven-day training 11-96 Aug, 2016. The training workshop for the MCU students of the Lao National University’s Faculty of Forestry was organized by ProCEEd in association with the Khao Niew theatre group at Setha Palace Hotel in Vientiane. 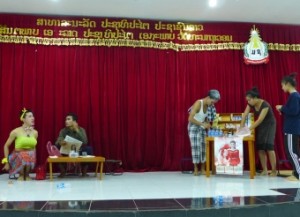 Twenty six students joined the theatre workshop led by three trainers and actors from Khao Niew. The trainers struck a good balance between acting lessons and working on the script of the theatre play. Every day began with a 45-minute warming-up session that included exercises to loosen and stretch stiff muscles and support the students to get in touch with their body. This daily session was always followed by different acting and imagination exercises. After lunch, a fun game helped everyone get over afternoon sleepiness.

The trainers demonstrated a few acting exercises to give the students ideas and inspiration. In one of the imagination exercises students were instructed to behave like a new-born baby and to evolve step-by step into a 90-year-old person. Another exercise asked the students to act like a rice corn that slowly finds its way through the soil and grows towards the sun – enduring wind and heavy rainfall.

Further acting exercises and group work on the first two days helped express the acting potential of the students.  Based on the trainers’ observations they decided about the cast for the five main characters of the play. Since the students intend to split up into two groups for the tour in Bolikhamxay, two main casts have been selected. 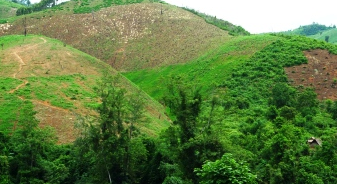 After a few days of practicing, voice training, incorporating all the advice and improvement suggestions from their trainers and getting comfortable with one’s own role it was time for the students to put on some make-up and slip into the stage outfit. The students really enjoyed this part of the workshop and the make-up and stage outfit supported the actors to grow deeper into their roles.

Even though many of the participants have already worked for ProCEEd and gained some acting experiences, the collaboration with Khao Niew helped all students improve their acting skills. On 18 Aug, 2016 the dress rehearsal successfully took place. The MCU team was ready for the tour then.

ProCEEd integrated waste management in its Environmental Education and Communication Strategy in 2015. Ever since, non-formal environmental education activities have been implemented through the project’s Environmental Tours in the Bolikhamxay Province and during public events in Vientiane Capital. The tours and events are run by volunteers of MCU) and Community Based Solid Management Units at Lao National University’s Faculty of Forest Science in cooperation with DEQP.

Starting 12 Sept, 2016 MCU plans touring three districts of Bolikhamxay Province for two weeks to instigate discussions about waste management and the reduction of plastic materials. The theatre play rehearsed during the workshop aims at encouraging villagers and government officials alike to reflect on their own behavior and experiences regarding plastic waste. The theatre play is intended to be one of the major attractions of ProCEEd’s Environmental Tour on waste management.

The theatre training was a first opportunity for ProCEEd and Khao Niew to work together. Khao Niew, a Vientiane theatre group established in 2008, offers mainly creative and poetic puppet performances which often convey a social message. Many of the Lao artists in this theatre group have worked for the National Circus of Vientiane and Kabong Lao Puppet Theatre Khao Niew specialized in puppet, shadow and mime theatre.

ProCEEd is a German development cooperation project implemented by the Lao Ministry of Natural Resources and Environment (MoNRE) and the Deutsche Gesellschaft für Internationale Zusammenarbeit (GIZ) GmbH. The project aims at improving knowledge, attitudes and practices regarding environmental and biodiversity protection as well as climate change adaptation in Laos. Learn more about the project here.