Deforestation and forest degradation have led to a reduction of the natural forest areas in Lao PDR over the past few decades. Increased greenhouse gas emissions, a general loss of biodiversity, increasing scarcity of timber and non-timber forest products and a reduction of environmental services from the forest areas are among the numerous consequences (e.g. Lestrelin et al. 2013, Saunders 2014).

Moreover, the declining forest resources affect the lives of many of the poorest populations in the rural areas, especially among ethnic minorities, for whom the forests are a cornerstone of their livelihood (Higashi 2015). While Lao PDR still has some of the highest forest cover on the Southeast Asian mainland with 46.7% (see table 1; MAF 2015), the forests have nevertheless diminished dramatically from an estimated 70% of the overall land surface in the mid-1960s.

However, there are contrasting trends in terms of forest cover. This paper presents three different data sources and briefly explains different methodologies for assessing forest cover rates. Official statistics as well as the FAO Forest Resources Assessment show a forest cover increase since the early 2000s (MAF 2015; FAO 2014) whereas Global Forest Watch still report a decreasing trend in terms of forest cover. A look into the details reveals that the increasing forest cover is mainly due to regenerating vegetation which is under the Lao forest definition counted as forest and primary forest areas are continuously decreasing. After shedding some light into the different data sources and methodologies in reporting forest cover, the discussions on drivers of deforestation and forest degradation will be presented. The interplay of direct drivers and underlying forces is complex and a comprehensive analysis of drivers, underlying forces and detailed spatially explicit quantifications to specific drivers are lacking. Finally, the paper will outline the most recent developments in the forest sector of Lao PDR with a new government that took office in early 2016 increasingly trying to combat illegal logging and working to reform the forest sector.

State of the forest

Lao PDR has recently gained international attention for its efforts to increase forest cover, as reported by the Forest Inventory and Planning Division under the Department of Forestry as well as the latest published FAO Forest Resources Assessment (MAF 2015; FAO 2014). According to the Forest Cover Assessment 2015 (MAF 2015), forest cover increased between 2010 and 2015 by 1.3% annually. The current trend of increasing forest cover and decreasing potential forest is explained by regeneration of fallows to forest. Official statistics, however, also reveal a significant decline in forest quality. Dense forest with a canopy cover of over 70% decreased from 29.1% to 8.3% of total forest area, while open forest (<40% canopy cover) increased from 16.3% to 28.9%. At the same time, large contiguous forest areas (>1.000 ha) decreased from 88% to 52% of total forest area, while smaller forest areas (<100 ha) rose from 4.5% to 30.2% (MAF 2005a).

After the establishment of the Lao PDR in 1975, forest resources were seen as ‘green gold’ (Kham Khieow) and became the new government’s main source of revenue generation. In 1986, the Lao government introduced market-economy reforms, called ‘New Thinking’ (Chintanakhan Mai) or ‘New Economic Mechanism’ aiming to encourage the private sector, thus shifting from a centrally planned to a market-oriented economy. As a result, the rich forests of Lao PDR diminished dramatically without generating substantial revenues for the country with an estimated net deforestation rate of approx. 2% per year during the 1990s due to fiscal mismanagement and widespread corruption (IUCN 2000).

In 1989 the Prime Minister Kaisone Phomvihane decided to rethink the forest policy of the country during its first National Forest Conference and the subsequently issued Decree 66 on a ‘Tropical Forest Action Plan’ outlined steps to be taken in order to achieve a forest cover of 70% (Phengospha 2015). Forest types were classified into different categories and later on different land use classifications were adopted in addition to the forest types. Since then the Department of Forestry (DoF) under the Ministry of Agriculture and Forestry (MAF) differentiates between current forest and potential forest where the former refers to forests that meet the definition of 20% canopy cover and a DBH of 10 cm on a minimum area of 0.5 ha. Potential forest includes regenerating vegetation not yet matching the criteria of current forest. In 2015 the potential forest area including bamboo and un-stocked areas used for shifting cultivation covered an area of 38.2% of the country (see table 1; MAF 2015). Lao policies that were promulgated since the 1990s, such as the one to eradicate shifting cultivation or the land allocation program aimed, amongst others, to increase forest cover to 70%. However, such policies reduced access for upland cultivation and swidden farmers and consequently food production and food security (Kenney-Lazar 2016) which has not been discussed widely within the government. 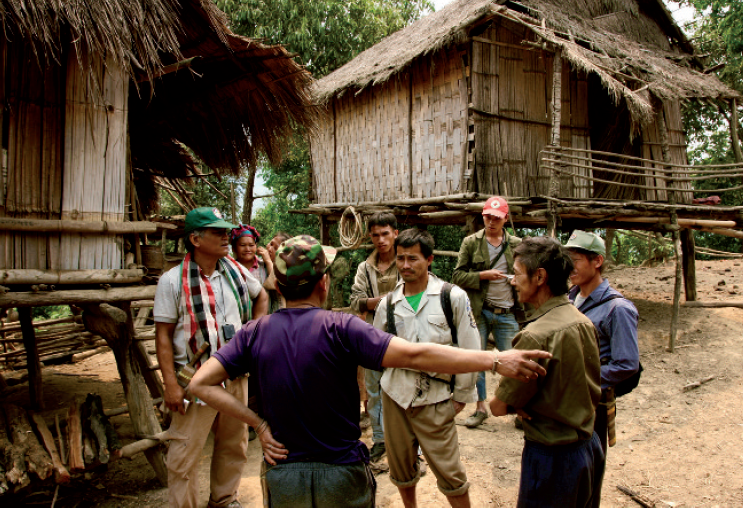 In addition to government-led national forest and forest cover assessments, there are also international organizations and other institutions assessing forest cover, for example for the purpose of international comparison applying other methodologies, definitions and resources. The Global Forest Resources Assessment by the United Nations Food and Agriculture Organization (FAO), applying the FAO forest definition of 10% tree canopy cover, shows a forest area in Lao PDR in 2015 of 18.8 million hectares and thus 81.3% of Laos’ total land area (see table 2; FAO, 2015). The assessment reports an annual forest area loss of 0.7% between 1990 and 2000 and then forest area increases of 0.8% (2000- 2010) and 1% (2010-2015), respectively. Right after the publication of the FAO Global Forest Resources Assessment Lao PDR received attention as one of the top ten countries in terms of annual forest area gain between 2010 and 2015 (FAO 2015). However, the Lao Country Report of the Global Forest Resources Assessment 2015 shows a steady decrease in primary forest area from 1990 to 2015 (see table 2). In addition, the report mentions that 27% of forest areas in Lao PDR experienced significant reductions in canopy cover between 2000 and 2012. From a methodological perspective, it needs to be understood that the 2015 FAO FRA forest area figure is based on linear extrapolation of the trend between 2002 and 2010 and, therefore, shows an upward trend to 2015.

REDD+ stands for Reducing Emissions from Deforestation and Forest Degradation and the + includes the role of conservation, sustainable management of forests and enhancement of forest carbon stocks. It is an international effort led under the United Nations Framework Convention on Climate Change (UNFCCC). The basic idea is to create a financial value for the carbon stored in forests, as well as means to leverage this, thus offering an incentive to developing countries to reduce emissions from deforestation forest degradation including the sustainable management of forests and enhancement of forest carbon stocks. REDD+ is implemented in three phases, starting with REDD+ Readiness, then the implementation of REDD+ strategies, and leading eventually to the flow of results-based payments for national actions that reduce emissions in the forest sector. REDD received substantial attention from the UNFCCC – and the attending community – at COP13 in 2007 as part of the “Bali Action Plan”. The extension REDD+ included sustainable management of forests, conservation and enhancement of forest carbon stocks. In Cancún (COP16) in 2010, the Cancun Agreements requested participating countries to develop: i) a national strategy or action plan; ii) a national forest reference emission level and/or forest reference level; iii) a robust and transparent national forest monitoring system for REDD+ activities, and iv) a system for providing information on how REDD+ safeguards (to avoid negative social and environmental outcomes) are being addressed and adhered to. The 19th Conference of the Parties (COP19) held in Warsaw in November 2013 saw a number of decisions adopted. This produced the ‘Warsaw Framework for REDD+’; a package of decisions, which along with those adopted at previous COPs completes the ‘REDD+ Rulebook’ and gives guidance for the full implementation of REDD+. REDD+ is part of the Paris Agreement and specifically mentioned in paragraph 5.

The European Union (EU) adopted its Action Plan on Forest Law Enforcement, Governance and Trade (FLEGT) in 2003. The scheme promotes good governance in the forestry sector around the world, with the aim of reducing illegal logging and strengthening sustainable forestry at the national level. It is designed to prevent imports into the EU of illegal timber and wood-based products. Although other countries have set up similar mechanisms (for example U.S. Lacey Act, Australia Illegal Logging Prohibition Act), the FLEGT Voluntary Partnership Agreement (VPA) aims for a high standard of in-country engagement to improve forest governance based on a timber legality definition, a timber legality assurance system, and a multi-stakeholder process. It defines inter alia what constitutes legally produced timber, how to control the supply chain and how to verify legally sourced timber. Throughout the FLEGT process the civil society involvement plays a crucial role.