Supporting Sub National Level Climate Action in India: Case Study from the EU-India Strategic Partnership for the Implementation of the Paris Agreement 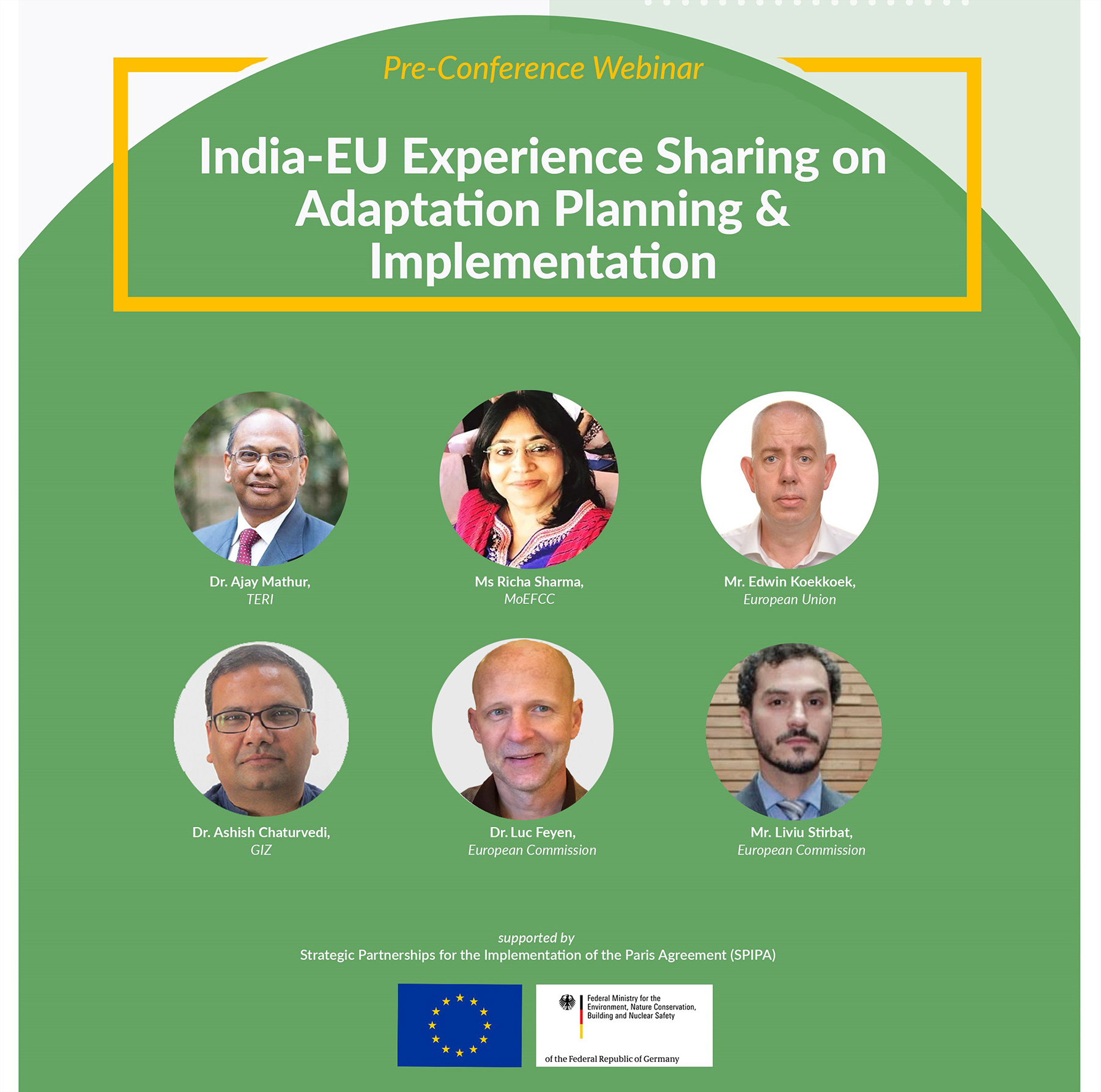 Climate Change severely impacts our planet’s eco-systems and biodiversity, in addition to human health and food systems and it’s impacting the most vulnerable communities in India.

In 2019, the Indian Ministry of Environment, Forests and Climate Change (MoEFCC) developed guidelines for revising State Action Plans on Climate Change (SAPCCs) for all the Indian States and UTs. It offers a strategic approach to revisiting SAPCCs considering new climate science and projections, as well as the country’s commitments under its Nationally Determined Contribution (NDC) and aligns with SDGs.

This pandemic has given the opportunity to prioritize public health strategies in the mitigation and adaptation efforts to climate change at the state level in the upcoming SAPCC document. Adaptation to climate change and enhancing climate resilience is essential for fostering ongoing sustainable development and disaster risk reduction efforts.

The Strategic Partnerships for the Implementation of the Paris Agreement (SPIPA) funded by European Union and the Federal Ministry of the Environment, Nature Conservation and Nuclear Safety, Germany is being implemented with Ministry of Environment, Forest and Climate Change to scale up climate policy collaborations and promote the implementation of the Paris Agreement. The Agreement signed in 2015 and set to become operational soon is the overarching document for countries to scale up climate ambition domestically and move to sustainable growth scenario. GIZ India is the implementing partner for the project. The project includes the following focus areas: (1) Networking, Capacity Building and Knowledge Management; (2) Low-carbon Modelling; (3) Adaptation; (4) Technical Exchange on Monitoring of Climate Action and (5) Mitigation.

While COVID 19 crisis has impacted the implementation of bilateral co-operation projects, alternate approaches like online consultations and virtual meetings are being successfully mainstreamed leading to desired outcomes. The EU-India strategic partnership for the implementation of the Paris Agreement (SPIPA) project provided a virtual platform for the MoEFCC, State governments, Union Territories (UTs) and other stakeholders to foster co-operation and co-learning on climate change adaptation. The overwhelming participation of 60 representatives from 30 States and UTs underlined the importance and relevance of this discussion.

The first of its kind virtual meeting among officials from State governments and Union Territories responsible for climate action at the state level was an initial step in a series of dialogues on ‘Adaptation Planning’ being planned under the Networking, Knowledge Sharing and Capacity building component of the EU-Strategic Partnership for Implementation of the Paris Agreement (SPIPA) project being planned. The event aimed for thematic discussions with a focus on exchanging best practices, lesson learnt as well as exchanges on opportunities and challenges in climate change adaptation planning at the state level. The active participation from the state representatives for this kick start event amidst the uncertainties of COVID-19 crisis would be an inspiration for organising future dialogues among Indian States and EU counter parts.

Specifically, the webinar, consisted of a plenary session and three breakout sessions, aimed at bringing together representatives from the Ministry of Environment, Forest and Climate Change (MoEFCC), the European Union (DG CLIMA, Joint Research Centre, EU Delegation to India), EU Member States (France), Indian States and Union Territories (UT), GIZ India and TERI to exchange information on the EU and India’s adaptation planning and implementation process, in particular at the state level. The plenary session of the webinar, being a public session, had around 110 participants from all over India and the breakout sessions were closed room virtual panel discussions among the state representatives. During her address, Ms. Richa Sharma, Joint Secretary and Head of Climate Change Division, MoEFCC highlighted the importance of experience and knowledge sharing between States and UTs within India as well as internationally with partners like the EU. She emphasised on the fact that States and UTs plays a critical role in climate action particularly in adaptation planning and implementation as local vulnerabilities and capacities must be considered for adaptation.

Eminent speakers from the European Union (EU) provided a fresh perspective on the effective implementation of adaptation planning strategies in each breakout session. Mr. Liviu Stirbat, Deputy Head of Unit, Directorate-General for Climate Action (DG CLIMA), European Commission shared a strategic policy level overview of adaptation planning and implementation in the EU. There is a similar process EU as well. In 2013, the European Commission adopted an EU strategy on adaptation to climate change. The strategy aims to make Europe more climate resilient. By taking a coherent approach and providing for improved coordination, it aims to enhance the preparedness and capacity of all governance levels to respond to the impacts of climate change. Under this strategy EU Member States are encouraged to prepare Member States’ national adaptation strategies. Dr. Luc Feyen, Joint Research Centre (JRC), European Commission, explained the recent developments in the use of climate information for adaptation planning with a cost-benefit analysis of adaptation options. He also stated that Coastal flood risk in Europe will dramatically increase with global warming but with mitigation and adaptation economic losses can be reduced by 95 percent. Dr. Marie Carrega, in charge of French National Adaptation Plan, French Ministry for an Ecological and Inclusive Transition, shared an overview of various climate change impacts in France. She also explained the strategies adopted by the French government to spearhead climate action through National Adaptation plans and sub national level action plans. She explained that comprehensive stakeholder consultations are the unique pillar of National Adaptation Planning process of France.

Dr. Suresh C Attri, Principal Scientific Officer from Himachal Pradesh emphasised that down-scaling climate data is crucial for creating a Climate Change Vulnerability Index at the sub-national level. He explained that Instead of administrative boundaries, Micro Watershed boundary-based Hydrological Modelling was more effective for Climate Change Vulnerability Assessment in the context of Himachal Pradesh considering the geographical vulnerabilities of the state. The presentation from Assam highlighted the role of a comprehensive institutional mechanism for mainstreaming climate change adaptation. The state has a dedicated institution responsible for climate action initiatives in the state called ‘Assam climate change management society’ which is chaired by the Chief Minister and has a board including the Chief Secretary. Dr O.K. Remadevi, Consultant & Head, Centre for Climate Change, Environmental Management & Policy Research Institute (EMPRI) from the state of Karnataka explained their unique initiative known as ‘Green Index’ developed with the support of research institutes like IISc Bangalore to evaluate climate resilience of development plans of the state government with the help of a set of indicators. The case study presentation of Kutch district in the state of Gujarat by Mr. Shwetal Shah, Technical Advisor – Department of Climate Change, depicted a perfect pilot scale example of community-based climate change adaptation following an ecosystem-based approach. Household level vulnerability assessment to identify the most vulnerable villages in the district was a unique approach taken by the Government of Gujarat.

This webinar also facilitated the technical capacity building of state nodal officials in terms of engaging in the closed room panel discussions through the virtual platform of Microsoft Teams. Prior to the webinar two technical support sessions were arranged for the state representatives for better understanding of use of the virtual platform.

The active participation from the state representatives for this kick start event amidst the uncertainties of COVID-19 crisis would be an inspiration for organising future dialogues among Indian States and EU counter parts.