SNRD Asia’s Working Group Allowance has given many ideas wings! 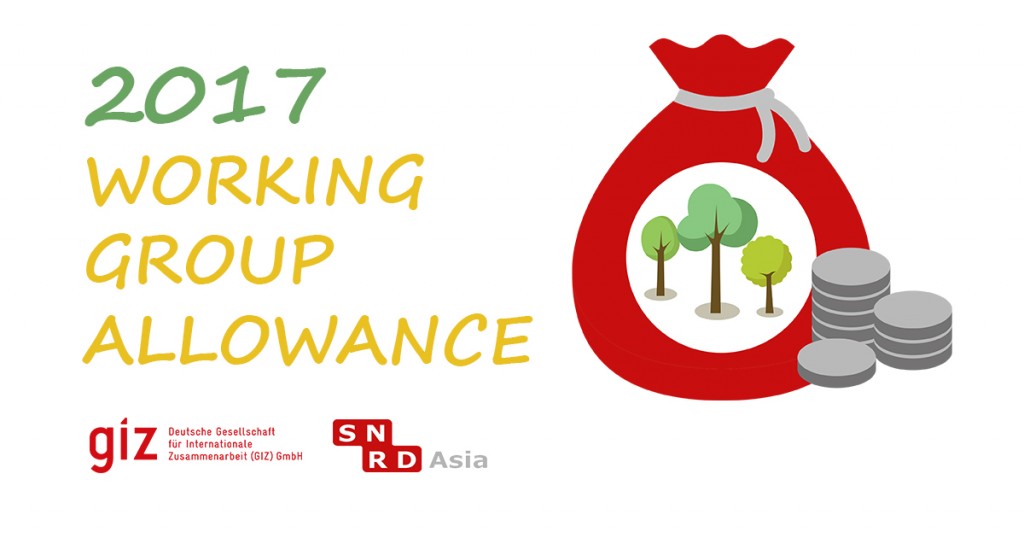 The first quarter of 2017 has been a busy time for the Steering Group (STGR) following the announcement of the call for submission of initiatives to be financed by the Working Group (WG) Allowance. This time round, a new mode was introduced with a competitive element in the proposal process. After the year came to a close, we can look back and say that this internal annual grant has proved successful: in total 7 proposals submitted and 100% of allocated budget expedited.

A quick recap on this: each WG and TF is entitled to 5,000 Euro and 2,500 Euro, respectively, to come up with a proposal. In case the WGs and TF do not make use of this entitlement, the fund will flow to a common pool where other WGs and TF can bid for. This ensures that all budget will not go to waste whereas for initiatives that may require a higher amount of money, this can be of a great helping hand.

To read this in full detail, see the official document here.

After receiving an official approval by the STGR, WGs/TF are now equipped with the financial support to work on their concepts. Initiatives that were implemented in 2017 are listed here.

“Through the Working Group Allowance, I have observed the increased active engagement among the members as it has given them rooms to collaborate and make concrete outputs without relying on the contribution of their own project,” said Nalina Hiranprueck, Network Manager

That said, it is not without flaws. Despite it being well received, active engagement across all members remain limited. It has been noticed that the active ones continue to be active while the inactive ones stay aback. Hence, the process will have to be adjusted to reach out to members whose participation can be seen limited.

Another recurring issue, which was underestimated at the onset, is administrative complication during the contract establishment. Therefore, WG/TF speakers will be advised to reserve some buffer time for the implementation of activities or development of products.

Moreover, emphasis will be put on the beneficiaries of the initiatives proposed. This is to make sure that the WG allowance is not used as an additional funding for some project activities, but that the benefits could be reaped throughout.

In all, the WG Allowance has fared quite well. Hence, we will be continuing the same this year though with some minor changes.

To provide incentive for development of knowledge products among members of SNRD Asia, up to 30,000 € has been allocated for WG/TFs’ disposal – 5,000 € per WG/TF and 2,500 € per Joint WG/TF. In principle, the WG/TF Allowance’s objective is to support the development, realisation or production of innovative ideas with the aim to enhance distribution and exchange of knowledge, practices and experiences, ranging from publications, reports, products, trainings, to exchange dialogues.