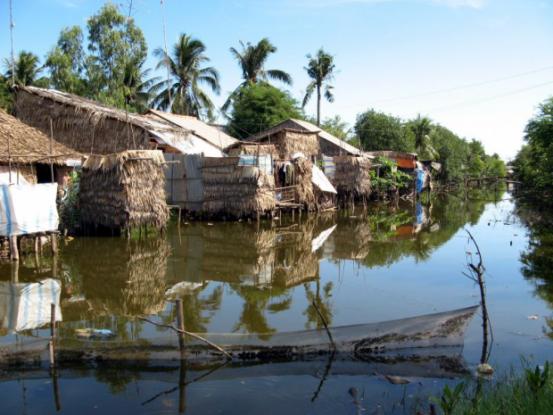 Climate change has a dramatic impact on the Mekong Delta, the “rice bowl of Vietnam”. Official studies suggest that by the year 2100, up to 39 % of the region could be inundated by the ocean, which would have serious consequences not only for its 17 million inhabitants. The Mekong Delta produces rice for 245 million people worldwide and thus plays a vital role in ensuring global food security.

The effects of climate change can best be seen on the coast, which is affected by the rising sea level, storms and tidal waves. Unprotected parts of the coastline are breaking away. Up to 50 meters a year are lost to the sea in some places. Houses are being flooded and fertile land is becoming salinated. Many people’s livelihoods are at risk.

In order to stop these trends, Germany and Australia have been supporting an integrated coastal management programme in Vietnam since 2011. The programme, which is being implemented by GIZ on behalf of Germany’s Federal Ministry for Economic Cooperation and Development (BMZ) and Australia’s Department of Foreign Affairs and Trade (DFAT), focuses on the restoration of the original mangrove forests as well as on sustainable rice cultivation, shrimp farming and better management of the many water channels that criss-cross the region. Furthermore, Vietnamese authorities are also receiving support for jointly drafting regional strategies for the future that transcend provincial borders. Such strategies will help to protect the coast from the impacts of climate change.

One of the greatest problems in coastal areas is erosion. It is causing more and more land to disappear, with the ocean encroaching further and further into the interior. In many places, houses now stand directly on the waterfront even though they were still hundreds of meters away from the shore only a few years ago. One reason is that the mangrove forests, which grow on an intermediary area between the ocean and dry land, are disappearing along with the coastline. The forests are an ideal buffer for absorbing the impact of storms and floods.

Stopping erosion
The coastal management programme has found a solution to erosion: based on complex measurements of the currents, a simple breakwater fence made of bamboo was developed. Set up properly in the ocean, it absorbs the power of the waves. Moreover, the fence collects the sand and mud particles that would be washed away by the water, thus creating new mudflats where mangroves and other plants can grow. The fences do not only stop erosion, but actually allow the coastline to be further extended into the sea by up to 180 meters in some places.

But as effective as the breakwater fences are, they represent only one of many contributions needed to protect the Mekong Delta’s 720 kilometres of coastline from the impacts of climate change. The programme has drafted a digital map of the entire coast in order to precisely identify what coastal protection measures are needed where. The measures range from bamboo breakwaters to new mangrove forests to massive walls of concrete in some particularly endangered areas. Such walls may not look beautiful, but they effectively absorb the impact of the waves.

Coastal protection measures cannot solve all the problems the Mekong Delta is facing, however. Many issues are at stake. The Mekong Delta is one of the most productive agricultural regions in Asia, but the farming sector is increasingly at risk as the rising sea level is pushing ever more salt water into the delta. At the same time, the river’s fresh water supply is becoming scarcer and less reliable – in part because of enormous dams in China and Lao.

In the spring of 2016, poor rains and lack of river water contributed to the worst drought the Mekong Delta has seen since weather records began 90 years ago – a shock for thousands of farmers, some of whom suffered severe crop failures. On the upside, the drought indicated to politicians that they must draft a coherent strategy for the entire Mekong Delta.

After all, the Delta, which is home to about 17 million people, is not a single administrative unit. It is divided into 13 different provinces, which often fail to coordinate plans and investments. Moreover, different national ministries are in charge of defining the region’s climate change response.

A new edict by Vietnam’s prime minister should help to improve regional coordination in the Mekong Delta. In the future, all actors – in particular provinces, ministries and international partners – will develop shared strategies in order to ensure that available resources are used much more efficiently.

Improving water management
The reform is especially important as it applies to agriculture and water management. The Delta is crossed by thousands of channels that bring farmers the water they need: freshwater for rice and fruit farms and salt or brack water for shrimp farms. So far, however, there is no clear system for determining what products should be cultivated where and how the water system should be adapted accordingly. As a result, the dwindling freshwater resources are often used inefficiently.

A better approach is possible, as the irrigation system in the southern Mekong Delta proves. In this region, water management was optimised in cooperation with local authorities, which led to improvements in 14,000 kilometres of channels – that corresponds to the distance from Germany to Australia. The measures have benefited 1.2 million people living in rural areas.

Nevertheless, water supply is not the only issue that needs to be addressed if agriculture is to adapt to the changing climate and environment. The Mekong Delta is marked by a large number of very small farms, which often have only 0.5 to 2 hectares. The advantage of this system is that many people can earn small but reliable incomes, while maintaining a high degree of autonomy. But the number of many independent farms that are no bigger than a football field makes it difficult to increase productivity and implement reliable standards. Accordingly, most of the products cultivated in the Mekong Delta are of poor quality and only fetch low prices, so farmers do not earn much.

One solution is to form farmer cooperatives. The GIZ supports this approach. Cooperatives make it easier to provide farmers with training concerning better cultivation methods that will boost their incomes and also protect the environment. For example, rice farmers could apply the alternate wetting and drying method, reducing water and pesticide consumption by 30 % and, at the same time, increasing incomes by up to 40 %.

Such approaches are now being integrated into the government’s “large rice field” programme, which encourages many small farmers to grow according to shared standards in order to ensure the quality of the product. Basically, they are supposed to act as if they were all farming one big rice field.

These are steps in the right direction, but they need more support. Individual farmers and residents of coastal areas can do little to adapt to climate change on their own. If, however, an initiative is implemented that involves many political actors as well as the local people, the hope is justified that the Mekong Delta will continue to supply food for hundreds of millions of people for decades to come. Right now, things are looking good.

Severin Peters is a senior consultant with the GIZ’s Integrated Coastal Management Programme in the Mekong Delta.
Email: severin.peters@giz.de