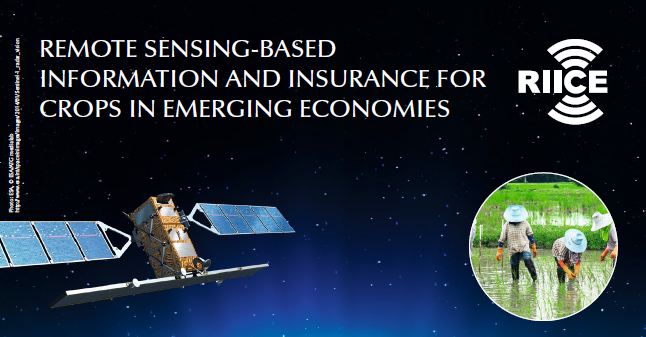 Farmers in several districts in Tamil Nadu are receiving payouts
because their losses had been identified by satellite data.

Chennai, (July 19th, 2017) – Early insurance payouts were surging during the recent Rabi cropping season in Tamil Nadu, a state in the south of India. For the first time in India, a state government made use of satellite data in assessing various damages and offered compensation to farmers under the prevented sowing feature of the 2.8 bn USD-heavy national crop insurance programme.

The technology use was made possible through the Swiss and German donor-funded programme RIICE (Remote-sensing-based Information and Insurance for Crops in Emerging Economies).

“Assessing damages based on remote sensing technology is introducing much objectivity into the crop insurance programme”, says MK Poddar, General Manager of AIC, India’s leading agricultural insurer.  His company made payouts to 203,000 small-holder famers that suffered from drought in the last rice season in Tamil Nadu. “Beyond the areal loss assessment, we are also keen to apply the technology to assess actual yields at the end of the season”, he adds.

The Tamil Nadu Agricultural University in Coimbatore (TNAU) has been delivering information about in-season losses and end-of-season yields to the Department of Agriculture, Government of Tamil Nadu for the first time during this season after testing the use of remote sensing technology in previous years and delivering accuracy rates around 90% when compared to either official data or own measurements.

“RIICE-Remote Sensing technology from TNAU allows us to assess crop loss and damages in a more transparent and timely manner”, says Gagandeep Singh Bedi, Agricultural Production Commissioner and Principal Secretary to Government. He is the highest-ranking ranking bureaucrat for agricultural matters in Indian’s southern state of 68 million inhabitants of which almost one million are rice farmers. “This was particularly useful during the last cropping season to identify villages that had been hit by drought and farmers benefitted from the technology by getting claims under prevented/failed sowing feature of the Pradhan Mantri Fasal Bima Yojana (PMFBY) in a record time,” he adds. It is for the first time the State Govt. has made use of remote sensing technology for crop insurance claim settlement.

The Tamil Nadu Agricultural University has been working with the International Rice Research Institute in the Philippines to also assess yields at the end of the season. “We believe that the technology can help the state government to obtain objective and transparent data on actual rice yields so that farmers can be indemnified quickly,” says Dr. S. Pazhanivelan, Professor and Head, Department of Remote Sensing & GIS and Principal Investigator of the RIICE project at TNAU.

The use of remote sensing technology to identify lost rice areas and estimate the rice yields has been tried and tested over recent years in several districts of Tamil Nadu. “Eventually with the help of satellite-based observations we can digitize the complete area estimation and yield data collection process”, says Manoj Yadav, Project Manager of GIZ, one of the implementers of RIICE.

Technically, the project relies mainly on radar-based satellites, some originating from the Indian RISAT 1 satellite but most delivered through the Sentinel mission of the European Space Agency (ESA). Based on the expertise of sarmap, a Swiss remote sensing company that developed a customized processing solution, it is possible to monitor the rice area and related information on the rice growth status. “The results of such public-private technology development is highly important to provide better risk management options for policy makers and insurance firms”, says Manuel Flury, Head of Food Security of the Swiss Agency for Development and Cooperation, RIICE main sponsor so far.

“We are glad to see that technological excellence is benefitting small-holder farmers that are impacted by adverse weather events,” he adds.