Meet Kheldho the mudskipper, an artistic metaphor for the damage we’re doing to our oceans

What we throw in the ocean ultimately comes back to us as seafood on our plates –
even though the plastic may not be very obvious.

My four-year-old son’s hurried footsteps betray his excitement. “There, Daddy! There it is!” he cries. Impatient, he lets go of my hand and runs ahead. We are looking at a 25-ft long mudskipper lighting up the area around it at the Bhagwan Mahaveer Children’s Park in Panaji. From where we’re standing, it’s hard to believe the glittering installation has been made entirely of marine debris. It has a papier-mâché-cum-beer can head, and a body comprising plastic mineral water bottles each holding a light bulb, shiny reflective fins using aluminium cans, and a bright yellow and red tail made from beer cans. It all makes for a rather impressive display of what might overtake fish populations in the oceans in the near future. 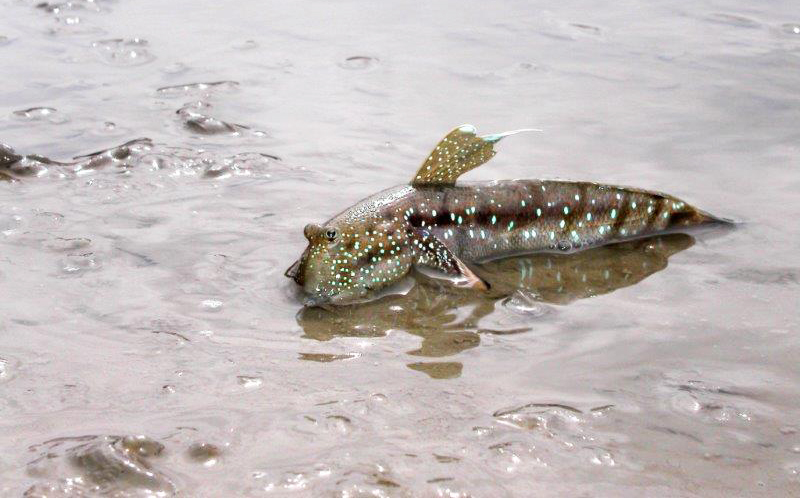 Pollution from marine debris is among the greatest threats facing the oceans. This includes the man-made, slow-to-degrade articles such as plastics, glass, metal, paper and rubber. Discarded overboard or brought indirectly to the sea via rivers, sewage, storm water or winds, most of these materials can remain in the environment for centuries. A recent study made a scary prediction of the oceans containing more plastic than fish by 2050.

The giant mudskipper, named Kheldho, was conceptualised and built by designer Aradhana Seth as a float for the Goa Carnival in February. It was paraded through all the major towns in Goa to a large captive audience. Kheldho as an idea came about as the mudskipper fish represents a balance between two worlds – land and sea – with a message that what we do in one affects (sometimes irrevocably) the other and vice versa.

Kheldho is the Konkani name for the mudskipper, an unusual fish that spends more time on land than in water. The fish is commonly found in coastal areas and has a particular preference for mudflats and mangrove forests. These ecosystems are characterised by highly dynamic conditions. Strongly influenced by tides, salinity and oxygen levels in these waters can vary greatly. Creatures in these environments have therefore developed a whole string of adaptations to survive these extremes. A mudskipper, for instance, can breathe using its skin while on land. Its front (pectoral) fins serve as limbs, allowing it to crawl, skip and even jump on land as it goes about its daily life foraging and defending its territory. However, even these impressive adaptations may not preclude it from the threats the oceans are currently faced with.

I work for the Indo-German Biodiversity Programme of the GIZ (Deutsche Gesellschaft für Internationale Zusammenarbeit), which specialises in international development. Kheldho is an initiative of one of the programme’s flagship projects, “Conservation and Sustainable Management of Coastal and Marine Protected Areas”, in partnership with the Goa Forest Department. The main goal of this project is the conservation of India’s unique marine biodiversity by involving local communities.

Kheldho was created keeping in mind that plastic not only comprises a major proportion of global marine debris, but is possibly the most persistent. Plastic debris in particular can have a major impact on marine wildlife. Thousands of sea turtles, sea birds and marine mammals die either by ingesting plastic or getting entangled in it. Baby leatherback sea turtles often ingest plastic bags, mistaking them for jellyfish, their major prey. The ingested plastic articles choke up the stomach and the guts of these species. This leads to a false sense of satiation, causing them to feed less and starve to death. Many of these species are already on the path to extinction.

There is another less obvious, albeit more insidious side to plastic pollution. Although plastics are slow to degrade, exposure to the sun, salt and waves causes them to disintegrate into tiny particles (less than 5mm), called microplastics. Often mimicking natural food, these particles find their way into the diet of marine organisms including plankton, worms, mussels and even fish. Microplastics are also known to concentrate toxic pollutants which have previously been washed into our oceans, including DDT and PCB. Besides having direct detrimental effects on the organisms consuming these particles, they then gain entry into the food chain.

Kheldho is not just a totem advocating for clean beaches and oceans, but he also warns us that what we throw in the ocean ultimately comes back to us, on our plates, in the form of delicious- looking seafood – the plastic not very obvious, much like the sea turtle mistaking the delicious-looking plastic bag for jellyfish.