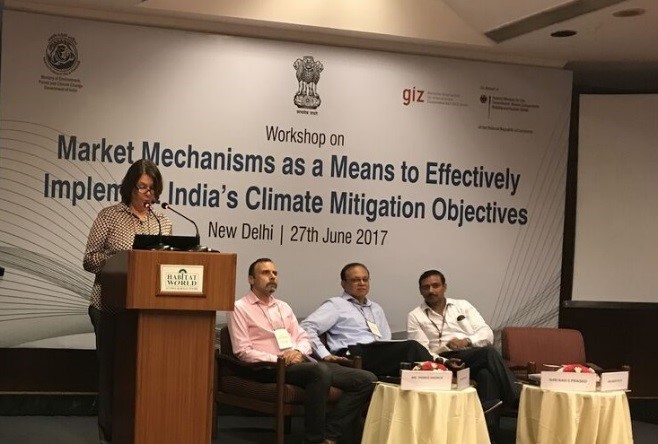 The Indian NDC has set a target of reducing its emission intensity of its GDP by 33-35 per cent until 2030, compared to 2005 levels; of achieving 40 per cent cumulative electric power installed capacity from non-fossil fuel-based energy resources by 2030; and of creating additional carbon sink of 2.5 to 3 billion tCO2e from additional forest and tree cover by 2030. Within the suite of choices that India has for implementing its mitigation targets, the role of market mechanisms could be advantageous. The Clean Development Mechanism, one of the market mechanisms under the Kyoto Protocol, had facilitated investments of about INR 1.6 trillion (US$ 24.6 billion) in the country through climate mitigation projects in different sectors (GIZ, 2014). India has significant experience in national markets by implementing PAT (Perform, Achieve and Trade) REC (Renewable Energy Certificate) Mechanism which addresses designated consumers to reduce their specific energy consumption and address the mismatch between availability of Renewable Energy sources and the requirement of the obligated entities to meet their renewable purchase obligation respectively.

At present, there are more questions than answers on various elements of the Article 6 including scope, governance, environmental integrity, accounting, etc. However, some questions that India might have to answer in future under the scope of Article 6 are: Will the PAT and REC targets be revised in line with India’s NDC targets? Is there merit in bringing these two schemes under a common “carbon currency” and perhaps expanding it to other sectors such as forestry? What kind of institutional preparedness is required for a domestic ETS (Emissions Trading Scheme)? How will it interact with existing sectoral approaches for climate mitigation?

Ministry of Environment, Forest and Climate Change (MoEFCC), Government of India and the German Federal Ministry for the Environment, Nature Conservation, Building and Nuclear Safety (BMUB) jointly with German Development Cooperation (GIZ) organised a one-day workshop on 27th June 2017 at India Habitat Centre, New Delhi on ‘Market mechanisms as a means to effectively implement India’s climate mitigation objectives’ with the objectives of informing relevant stakeholders on the provisions of market mechanisms under the Paris Agreement; and discuss strategies on how India can effectively utilise market mechanisms (both domestic as well as upcoming global markets) to achieve its climate mitigation objectives.

There were 3 sessions viz. the Inaugural Session; Session II on Domestic market mechanisms and their role in achieving India’s climate mitigation targets; and Session III on International market mechanisms, Article 6 of the Paris Agreement and how India can benefit from the upcoming carbon markets. 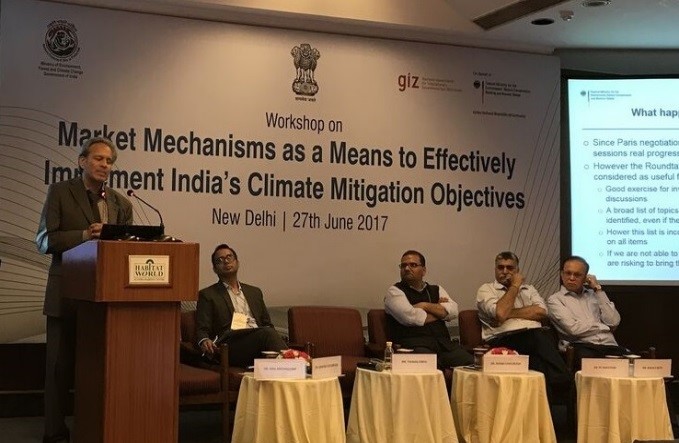 The inaugural session focused on the domestic policy priorities, international policy architecture and the role of international cooperation, including technical cooperation. The session highlighted that with current domestic policy landscape, India will be able to surpass the targets mentioned in their NDCs. Though NDCs don’t specifically mention market mechanisms, yet in years to come market mechanisms could be a way to meet these targets.

Session 1 then built up from the discussion on policy to actual implementation of market based instruments in the Indian context. This session highlighted the work in India around PAT, REC, PMR (Partnership for Market Readiness), and private sector action on internal carbon pricing.

The event was attended by more than 85 participants.