“If we can make a difference – we can make things happen – then that’s the legacy we will leave for the next generation,” DENR Undersecretary for Field Operations Isabelo Montejo said.

The municipality of Macrohon, situated in Southern Leyte, recently witnessed the first signing that will pave way for a greener effort on Reducing Emissions from Deforestation and Forest Degradation, also known as REDD+.

The “Declaration of Support for the National Implementation of REDD+” has been signed on September 14, 2016, after various stakeholders reached agreements on forest protection and rehabilitation during the National REDD+ Congress: A Platform for Learning Exchange. 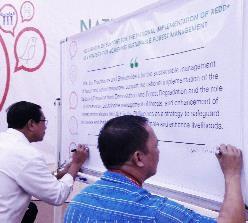 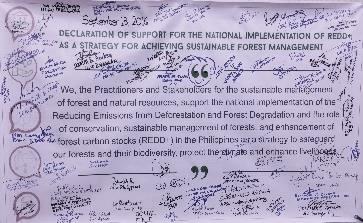 DENR Regonal Director Leonardo Sibbaluca and Mr. Jason Calva, on behalf of Southern Leyte Gov. Damian Mercado, led the signing of the Declaration of Support for REDD+ (left). The Congress was the first gathering of all REDD+ practitioners and stakeholders in the Philippines, and supported and elaborated on the commitment for sustainable forest management through REDD+ initiatives (right).

“The Philippines has already achieved a lot in establishing the framework for REDD+ implementation as a strategy towards forest and climate protection while conserving the country’s biodiversity and enhancing local livelihoods. The way forward is to complete the governance and policy framework, and to move into full-pledged implementation country-wide,” Dr. Bernd-Markus Liss, Director of GIZ’s Climate Program, emphasized.

To complement and underpin the Declaration, a joint Provincial Technical Working Group commitment was also drafted and approved. This effort has been led by the local government of the provinces of Albay, Eastern Samar, and Davao Oriental, and is aimed to be passed to mandated agencies and the House of Representatives to stress the importance of keeping our forests intact. In so doing, it will help secure the climate change mitigation options of the Philippines’ Intended Nationally Determined Contributions to global greenhouse gas emissions reduction of 40% from the forestry sector through forest protection and forest rehabilitation.

The Joint Declaration will also be submitted to the Office of the President for appropriate action and, ultimately, for the nation-wide implementation of REDD+.

Organized by the Deutsche Gesellschaft für Internationale Zusammenarbeit (GIZ) in partnership with the Department of Environment and Natural Resources (DENR) and REDD+ stakeholders with funding from the International Climate Initiative of Germany’s Ministry for the Environment, the Congress combined the sharing of knowledge on the implementation of REDD+ as a strategy for addressing climate change, achieving sustainable forest management, and enhancement of livelihoods in the Philippines.

The 4-day conference was held on 12–15 September 2016 at Kuting Reef Resort and Hotel in Macrohon.