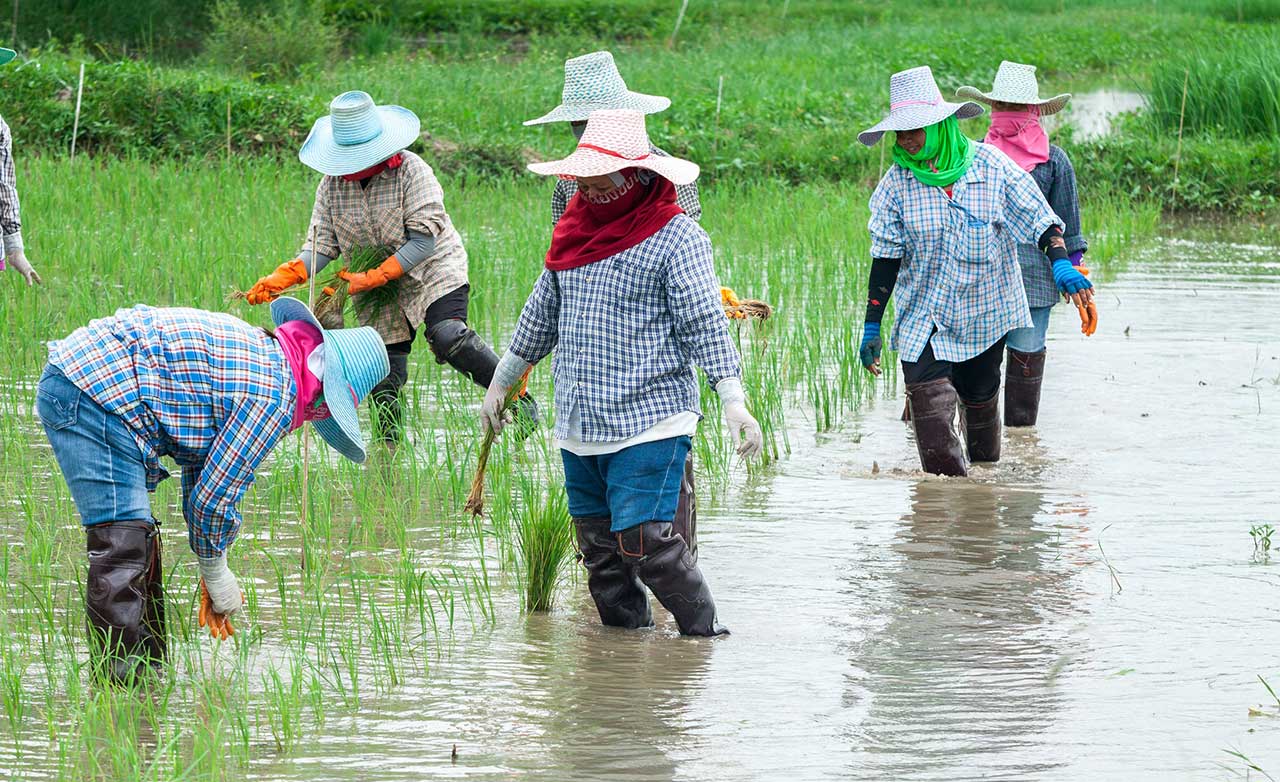 Background
In September 2016,the government of Thailand ratified the Paris Agreement, thereby officially confirming the commitment towards climate change mitigation and adaptation in order to limit global warming. The Paris Agreement, which entered into force on 4 November 2016, requires all Parties to the Convention to put forward their best efforts through “nationally determined contributions” (NDCs) and to strengthen these efforts in the years ahead. Thailand’s Nationally Determined Contributions (NDC) envisage a reduction of greenhouse gas (GHG) emissions of at least 20% by the year 2030 compared to the projected business as-usual situation. Thailand is currently the world’s 4th largest emitter of GHG – mainly methane (CH4) – from rice cultivation. Globally, it is estimated that CH4 emissions from rice paddies amount to at least 500 million tons of CO2 equivalents annually. However, rice cultivation does not only contribute to climate change – the sector is also highly vulnerable to adverse climate change impacts, as extreme weather events are a threat to harvest. To achieve a paradigm shift in Thailand’s agricultural sector overall, it is therefore crucial to initiate change in rice cultivation.

While global demand for sustainably produced rice is increasing – Mars Food for instance, a major actor in the global food industry, recently announced its commitment to switch to more sustainable sourcing of rice –, supply lags behind. This challenge is being addressed by the Sustainable Rice Platform (SRP), a global multi-stakeholder alliance. The SRP Standard on Sustainable Rice Cultivation (SRP Standard) was launched in October 2015. It provides a working definition of sustainability in any rice system that can be objectively measured using quantitative Performance Indicators (PIs). Amongst other sustainability criteria, GHG mitigation and adaptation play a central role in the standard. While effectiveness and efficiency of the techniques required by the SRP Standard have been proven by science and applied in pilot studies, several barriers to adoption have been identified, which require the implementation of incentive mechanisms. 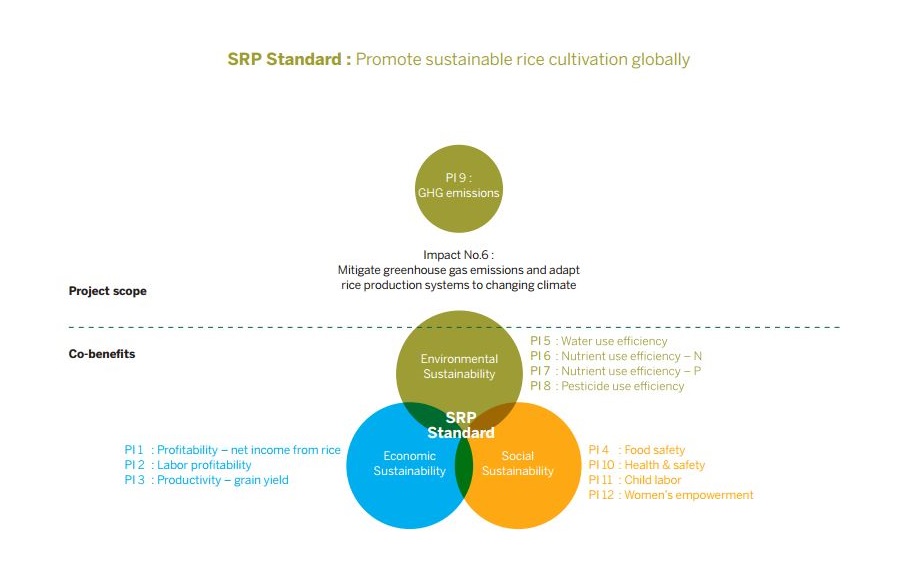 The Thai Rice NAMA
In order to support Thailand to achieve its NDC, the concept for a new NAMA-support project or NSP (called the “Thai Rice NAMA”) is being prepared in response to the NAMA Facility’s 4th Call for proposals. The main goal of this project is to reduce greenhouse gas emissions – mainly methane – from irrigated rice cultivation in six focus provinces of the Central Plains of Thailand: Chainat, Ang Thong, Pathum Thani, Singburi, Ayutthaya, and Suphanburi (short: CAPSAS). Different financial incentive mechanisms shall be implemented to facilitate a sector transformation to sustainable farming practices according to the Sustainable Rice Platform (SRP) Standard. One of the SRP Standard : Promote sustainable rice cultivation globally SRP Standard’s key goals is to mitigate GHG emissions and to promote climate-resilient rice-production systems. The above graphic visualizes the different issues addressed by the SRP Standard and the related PIs, how they are related to the three pillars of sustainability, and how the scope of the NSP is defined in relation to the Standard’s scope. The focus of the NSP is clearly on the mitigation of GHG emissions from rice cultivation, while additional co-benefits will be realized related to the other areas which are improved by the standard.

Expected Mitigation Potential
The most relevant technique to be applied as part of the SRP Standard to mitigate greenhouse gas emissions is Alternate Wetting and Drying (AWD). AWD is a water management methodology which features repeated interruption of irrigation, so that rice fields are not constantly flooded, reducing the occurrence of methane producing bacteria. The International Rice Research Institute (IRRI) has strongly contributed to the development of the proposal by providing estimations on the mitigation potential of the project. Over the whole project timeframe of 5 years, a realistic mitigation potential of around 1.664 millon metric tons (Mt) of CO2 equivalents (CO2eq) is expected. The estimations consider direct emissions of methane (CH4) resulting from flooding of rice fields, and nitrous oxide (N2O) related to fertilizer application, complemented by indirect CO2 emissions resulting from fertilizer production. AWD alone has the potential to reduce direct CH4 emissions in CAPSAS by 26% on average, as compared to continuous flooding. CAPSAS should be conceived as a lighthouse region that will stimulate uptake of mitigation practices in other provinces. It is assumed that spill-over effects from 6 target provinces to the entire rice area in Central Thailand within 5 years after project termination are realistic. The Thai Rice NAMA project would utilize important lessons learnedfromtheBRIAproject andcontinue established partnerships with the Sustainable Rice Platform and other important partners.

Expected Project Timeframe
The project outline was submitted by the Thai Rice Department at the end of October 2016. In December, feedback was provided that the Thai Rice NAMA project has been shortlisted for a detailed on-site assessment together with 11 other project outlines out of 75 project outlines that had been submitted in total. The on-site assessment was conducted by a team of three assessors in Bangkok – including a field trip to visit Community Rice Centres (CRCs) in Suphanburi and Chainat – from 10-13 January 2017. The purpose of the assessment was to evaluate the preparedness of the project in more detail and to assess the degree of national ownership and stakeholder commitment. Currently, 11 projects – including the Thai Rice NAMA – are still in the competition, and at the end of February 2017, the donors contributing to the NAMA Facility funding will decide how many and which projects should receive funding for the Detailed Preparation Phase (DPP) of the project implementation. At the end of the DPP, a detailed project proposal would need to be submitted for the final assessment and the NAMA Facility’s decision on funding for the whole project implementation. If approval is granted, the timeframe for the implementation of the project would be five years, starting in 2018.