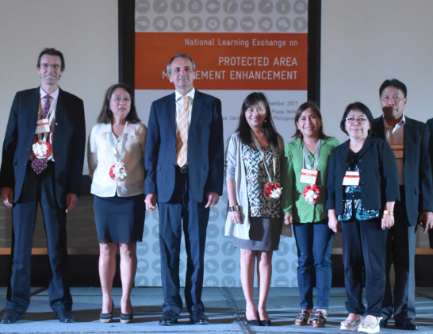 Biodiversity partners. The German Government has cooperated with the Philippine government in the field of environment and natural resource management.

The Protected Area Management Enhancement (PAME) Project successfully held a National Learning Exchange at the Crowne Plaza Hotel in Ortigas Centre, Pasig City, on 6-7 September 2017. The learning exchange summit provided the venue for sharing the knowledge and experiences of project partners from over 160 PAME-supported sites all over the Philippines. 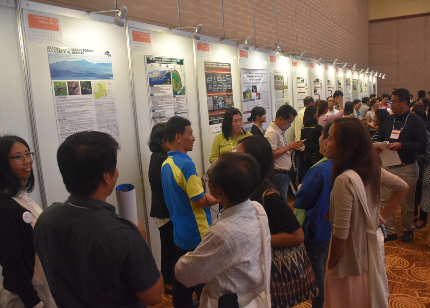 The National Learning Exchange included a “PAMElihan” (marketplace) session where posters from the PAME 160 sites were presented and showcased.

The PAME Project is a partnership between the Deutsche Gesellschaft für Internationale Zusammenarbeit (GIZ) GmbH and the Department of Environment and Natural Resources (DENR)-Biodiversity Management Bureau (BMB). The project has supported a global record of 160 protected areas in the country. Fifty-six (56) new terrestrial and marine protected areas covering 170,000 hectares were also established, including Negros Occidental that has been acknowledged as a special wetland area under the RAMSAR convention and also as a major East Asian-Australasian Flyway site.

DENR-BMB Director Mundita Lim also highlighted “the importance of the country’s biodiversity, with the Philippines being one of the world’s most mega-diverse countries.”

Overall, the PAME project reached its goal to improve the state of management effectiveness of more than 60 National Integrated Protected Areas System (NIPAS) areas as shown by the average increase in the management assessment scores by more than 30% for these areas. In addition, the capacities of more than 17,000 representatives of communities, national and local government units, the DENR, civil society organizations, and the academe to manage protected areas were developed under the project. 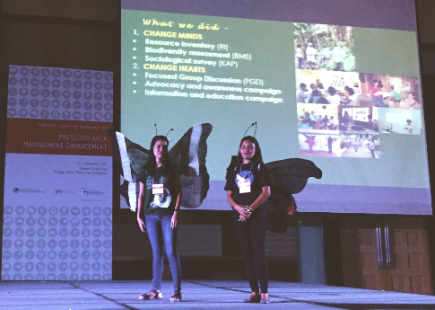 The butterfly mascots of Catanduanes were used as part of their awareness raising campaign and were made out of recyclable materials.

The event drew together more than 200 participants from different partner government units and organisations across the country to share their stories and experiences in the management and conservation of their respective environmental protected areas. Among these experience are the effective cooperation among the national and local governments, communities, NGOs, indigenous peoples, and other stakeholders; empowerment of communities to take the lead in developing their culturally unique approaches to protected area management; inclusion of sustainable tourism and other livelihood projects in the management approaches; and empowerment of women to play important roles in protected area management.

The National Learning Exchange included a “PAMElihan” (marketplace) session where posters from the PAME 160 sites were presented and showcased. 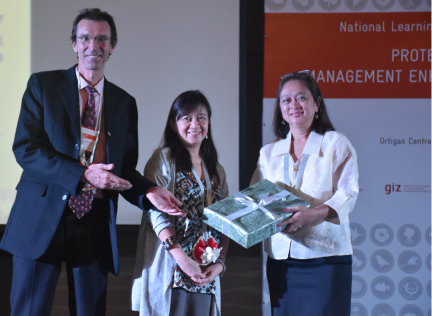 The learning summit also featured poster presentations and creative ways of promoting and highlighting the importance and uniqueness of biodiversity in protected areas, for example, in Catanduanes, the partners used butterflies as mascots.

The butterfly mascots of Catanduanes were used as part of their awareness raising campaign and were made out of recyclable materials.

The Philippines is one of the world’s 17 most biodiverse countries, which together host 70% of the world’s biodiversity. However, it is also a global biodiversity hotspot due to its continued population growth, overexploitation of resources, pollution, and extreme vulnerability to climate change. Under the PAME Project, the German government, through GIZ, worked with the Philippine government to develop the capacities of the Filipino people to sustainably manage their biodiversity for food security, sustained livelihoods, health, and protection from the disastrous impacts of climate change.

“It’s impossible to tackle climate change without addressing loss of biodiversity. Protecting and restoring ecosystems can help us reduce the extent of climate change and cope with its impact,” Berthold Schirm, PAME Principal Advisor, said.