Encouraging Female in a ‘Masculine’ World

PROJECT CONTEXT
Indonesia is home to the third largest area of tropical rainforest in the world. It is a global biodiversity hotspot and has the world’s largest area of peat swamp forest. Continuing deforestration and forest degradation have caused rapid loss of biodiversity, particularly in Sumatra and Kalimantan where remaining forest ecosystems and their biodiversity are under threat. This is having an increasing impact on areas of peat swamp forest, which possess flora and fauna and are important carbon sinks. Loss of biodiversity affects ecosystems’ capacity to adapt to climate change. It jeopardizes the livelihood of the rural population who utilizes raw material and food (medicinal plants, resin, oils and fats, rubber) from forests inside and outside of protected areas. At the same time, deforestation contributes significantly to the high CO2 emissions of the country. Existing surveys are insufficient for identifying high conservation value areas with any certainty of for developing concepts for their protection. Current approaches are inadequate and lack support from local communities, who are not sufficienttly involved in decesion-making procesesses regarding the establishment and management of protected areas. Therefore the Government of Indonesia is determined to stop uncontrolled deforestation and forest degradation.

With the Biodiversity and Climate Change Project (BIOCLIME), Germany supports Indonesia’s efforts to reduce greenhouse gas (GHG) emissions from the forestry sector, to conserve the biodiversity of high- conservation value forest ecosystems and maintain their carbon stock storage capacities, and to implement sustainable forest management for the benefit of its people. Germany’s immediate contribution focuses on supporting the province of South Sumatra in developing and implementing a conservation and management concept for lowering emissions from its forests and conserving forest biodiversity in order to contribute to the GHG emission reduction goal and the achievement of the Aichi Biodiversity Targets in Indonesia. 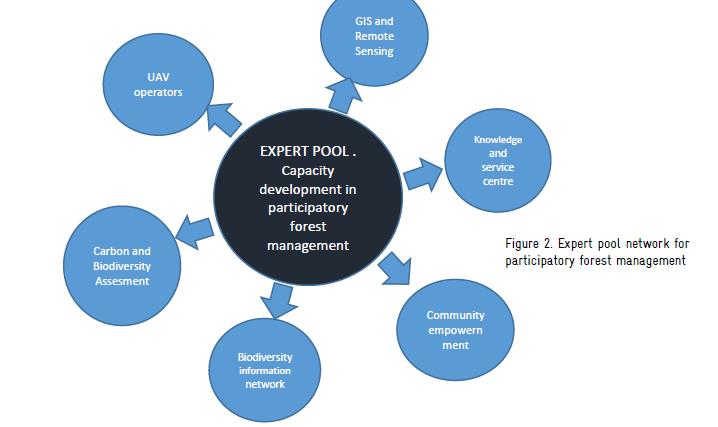 GENDER INITIATIVE
The initiation of The Expert Pool or Tim Kader Ahli (TKA) for Participatory Forest Management Forest and all topics related to it are often considered as a ‘masculine’ world that involves physical work and complicated-advanced technology which believed to be more comprehended by- and fits to male rather than female. Climbing a tree, passing the river, soaking in the mud, and developing critical thinking in a precarious situation are most of the time associated with male and their masculine world. The BIOCLIME project introduces a gender approach to its stakeholders in parallel with the initiation of The Expert Pool or Tim Kader Ahli (TKA) at provincial and district level. This approach aims to encourage female to take part in activities implemented in the field. The project established small teams for field work involving the TKA that has minimum 2 female as team personnel. For instance in forest carbon and biodiversity survey, the team is consisting of 8 male and 2 female. These joint-team work together in field activities, and female are given more chance and guidance to have practical learning toward this ‘masculine’ work. Learning from this initiative, we found that to go deep into the forest and to practice some ‘masculine’ works could also be part of female world. Another activity which requires skills in applying advance technology is the participatory monitoring using Unmanned Aerial Vehicle (UAV). This technology is additionally introduced to female with particular specification (eq. Understand the basic procedure in monitoring report system using UAV). Female were provided with tutorial training before engaged in the operation of UAV to monitor forest changes.

TKA is a pool of individual agents/selected personnel of related stakeholders (GO, NGO, university and research, private sectors, and community) who are facilitated continuously by the project in capacity development. TKA involvement is based on their participation on project’s activities and their interest on natural resource management, remote sensing, and/or community based forest management.

The chart below shows the expert pool in different levels and their immersion in particular issues. In provincial and district level, Bioclime has conducted numerous activities that eventually lead to the advancement of expertise in mastering Un-manned Aerial Vehicle (UAV), GIS and Remote Sensing, and Field Inventory. Currently, Bioclime is in the process of developing a knowledge and service centre by strengthening local NGO and other partners. The main idea is to encourage local people and FMU to be able to access national/international funding to finance their environmental actions with the support of this to-be-established service center. In village level, Bioclime has trained these selected persons in organizational strengthing, NTFPs, participatory mapping, and natural resource management. They involve actively in project activities and act as the motivator within the community group (Kelompok Tani Hutan). 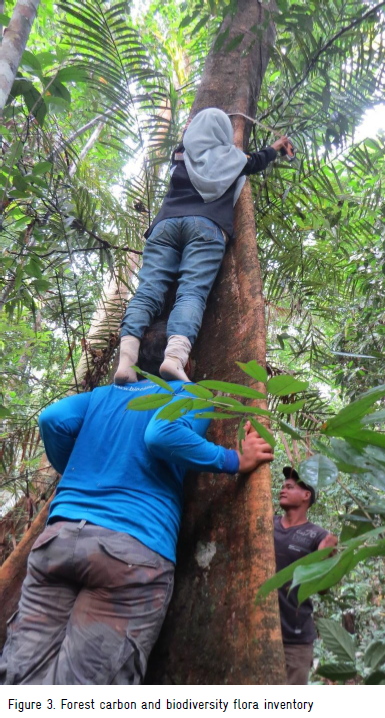 Gender Impact
Project ensures females are also becoming part of the TKA and get equal opportunity in knowledge sharing from its network. TKA and the expertise they have are considered as an asset, not only for them as an individual but also for the institutions in which they are working for: GO, NGO, private sectors, university and research centre, and local community.

The impact of encouraging female involvement into this ‘masculine’ works exposes the noble ideals that male and female have an equal opportunity to learn and to get access into, realizing that there are no particular border in implementing forest-related activity as long as both gender are willing to support each other. These female, especially the ones from FMUs and university, perform as the pioneer in this ground works as they are very often involved in field activities. Recently, our project has identified numbers of young and talented female in FMUs and local universities who can further inspire other female to involve and to develop critical thinking for the improvement of forest management in South Sumatra.

BIOCLIME continously monitors the activities and knowledge sharing among institutions by regularly update data of training participants and conduct constructive discussions to improve female participation in the future.