June, 28 – 30, 2016 Following an invitation of the China Agricultural University (CAU), DCZ visited the universities’ Science & Technology Backyard Programme (STB) that started in Hebei Province in 2008 and now is also active in the maize-growing county of Lishu, Northeastern China. 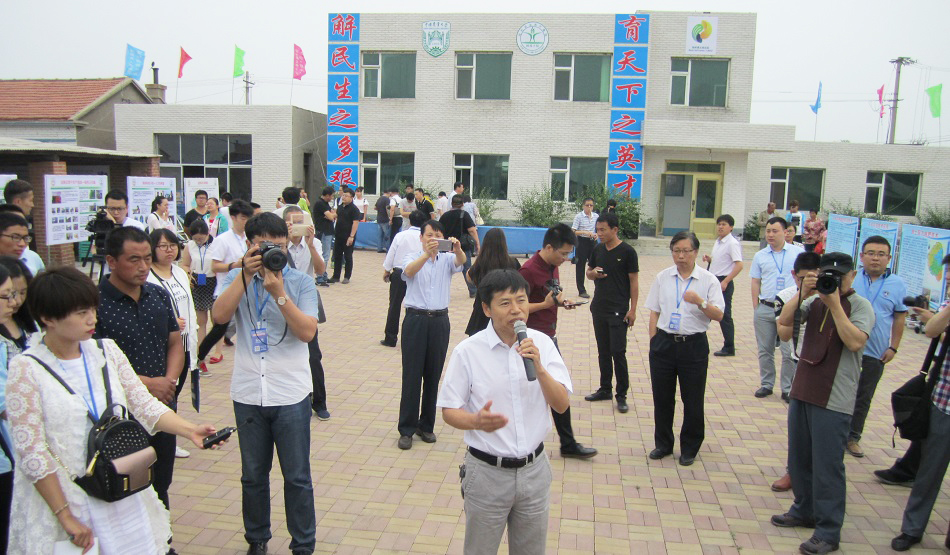 The STB is a joint research approach that involves agricultural scientists, local extension officers, and smallholder farmers. During each growing season about 10-15 agricultural master and PhD students conduct their field research together with Lishu farmers while also living in the farming villages for 2-3 years. In close collaboration with the local extension service center the objective is to optimize the on-site specific integrated soil-crop system management technologies (ISSM) via the organization of farmers maize yield contests and farmer cooperatives. Selected best farmers of the county contest (now more than 2000 farmers take part in the contest every year) that apply ISSM techniques also become leading enthusiastic participants in knowledge transferring by attracting other farmers to join their cooperatives. The researchers together with extension service are invited to be the agronomic technique consultants of the cooperatives. First results demonstrate that the county-level crop yield could be increased about 20 – 40 % without more fertilizer input. Also emphasis is made to introduce techniques to avoid the burning of maize straw, a common practice of farmers in Jilin province.

With strong policy support from the local government to sustain scientist-farmer linkages, the case in Lishu County proves that agricultural universities/institutions can be dominant players in agricultural extension and knowledge transfer.

Worldwide smallholder farmer are affected by at least two major developments in the food market. The increased consumer sophistication and their awareness of food safety issues and secondly the increase of supermarkets as major food outlets that demand a restructuring of supply chains. These developments put smallholders at a disadvantage compared to large farmers, state-farming companies and foreign suppliers.

Lishu is one example of how structural change takes place in the Chinese agricultural sector. The county has an agricultural smallholder population of 600.000 with on average 0,5 ha of arable land per agricultural laborer (three times higher than the national average). Currently, already 40% of all farmers in Lishu have joined cooperatives with an increasing tendency. A single cooperative’s land area can get as large as 200 – 400 ha. Especially after the official implementation of the Law of China on Specialized Farmers Cooperatives in 2007, the farmer’s specialized cooperatives in China are developing rapidly. In a cooperative in Lishu, the same seeds, fertilizers, and chemicals are chosen and are purchased in batch. The operations of cultivation, planting, fertilization, weed and pest control are pursued with the same standard and techniques based on the recommendations of leading farmers within the cooperatives. In autumn, each farmer member harvests his own field. Especially after the maize price decrease by 20-30% this year, smallholder farmers seek advice through public funded services to increase their maize productivity or completely shift to more remunerative productions, such as horticulture.

Nationwide at present, there are about four different operating types of farmers’ specialized cooperatives. The first ones are “cooperative plus farmers”. Such cooperatives are generally organizations set up by farmers (not state-driven or organized top-down) through which they market their products. These are the major form of farmers’ specialized cooperatives in many places. Such cooperatives can link small-scale farmers to traders, processors and retailers downstream in the value chain, including modern value chains catering to high-quality markets. In addition, these cooperatives can provide farmers with bargain power in increasingly concentrated food markets, thus furthering the equitable distribution of the benefits in the value chain.

The second ones are “cooperative plus production bases plus farmers”. The aim of such cooperatives is to organize farmland together to achieve a scale effect and produce more efficiently. The cooperatives guide the farmers in terms of farming activities and techniques through production bases and they market the members’ products on a commission basis.

The fourth types of cooperatives are “cooperative union plus farmers”. This organization mode is an integration of different types of related cooperatives. The unions combine production, processing, and marketing, which give incentives to cooperative members and farmers in production.

Read more on the rise of new farmer cooperatives in China here:
http://dcz-china.org/wp-content/uploads/2016/07/Cooperatives-in-China_Bijman_Jos_478.pdf