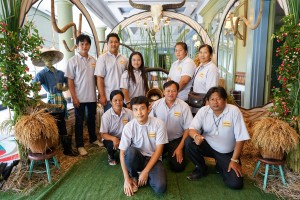 Back in 2014, a project on “Better Rice Initiative Asia” or BRIA, under the joint cooperation of GIZ, the Rice Department and BASF (Thai) Limited, launched a TV programme on the Royal Thai Army’s Channel 5 to educate farmers and the general public about safety, social responsibility and sustainable agriculture.

At the closing of the TV series on June 19, 2017, awards were presented to outstanding farmers at Maruay Garden Hotel, Bangkok. The event was jointly chaired by Mr. Petrus Ng, managing director of BASF (Thai) Limited; Mr. Suriyan Vichitlekarn, regional project director of GIZ and Mr. Suwat  Jearakongman, deputy director-general of the Rice Department.

“During the past four years, we have learned from trials and errors. We allowed people who viewed our programme to field questions, and this led to our all-    round TV programme,” said Mrs. Pornsiri.

Dr. Suntara Tobua of Kasetsart University’s Faculty of Education said: “For this year, viewers of our programme are from a diverse group of people. More than 100 farmers, 100 students, and around 200 from various groups of people. People are interested in our programme. We use simple language and explanation in explaining various rice strains, so our viewers can grasp the essence of what we talk about, which will benefit them.”

Ms. Watinee Tancharoen of BASF (Thai) Limited, which is a main sponsor of the programme, said: “Our company is glad to take part in this good programme that involves Thai farmers. Rice planting is key occupation in Thailand. I hope better knowledge can be imparted to more and more farmers, in addition to TV Channel 5. Other TV channels, YouTube and Facebook are also interesting media.” 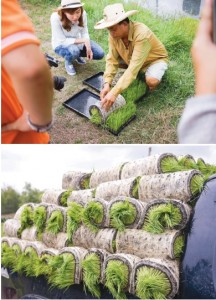 GIZ’s BRIA project manager Atthawit Watcharapongchai said: “SRP is key to sustainable rice production. Not just more output, but also lower production cost. We must also think about sustainable production, which can be passed on to the next generation. Our project will send DVDs from our series to more than 50 schools around the country to impart knowledge to every farmer.”

Mr. Pichai Tosa, who represented participating farmers from Nakhon Sawan Province, added: “This TV programme has drawn a lot of interest from farmers in several provinces, including Uthai Thai, Chaiyaphum and Surin. They came to our center to learn about seeding and green bean cultivation. In the northeastern region, the farmers can plant green bean only once a year. They want to know how to increase production.”

“Moreover,” said Mr. Pichai, “we have organised training courses for young farmers in Nakhon Sawan Province.” and that, “When they grow up, they can impart their knowledge to other farmers.”

At the end of the event, winners returned home with commemorative plaques and cash.

The project has succeeded in imparting knowledge on sustainable rice cultivation to the participants. With support from the government and the private sector, farmers around Thailand will gain better knowledge in productivity and marketing to raise their quality of life and remain the strong backbone of the country.