Long treated as a bottomless resource pit, over-exploitation of the ocean, pollution and rising sea levels are having a catastrophic impact on life in the bay 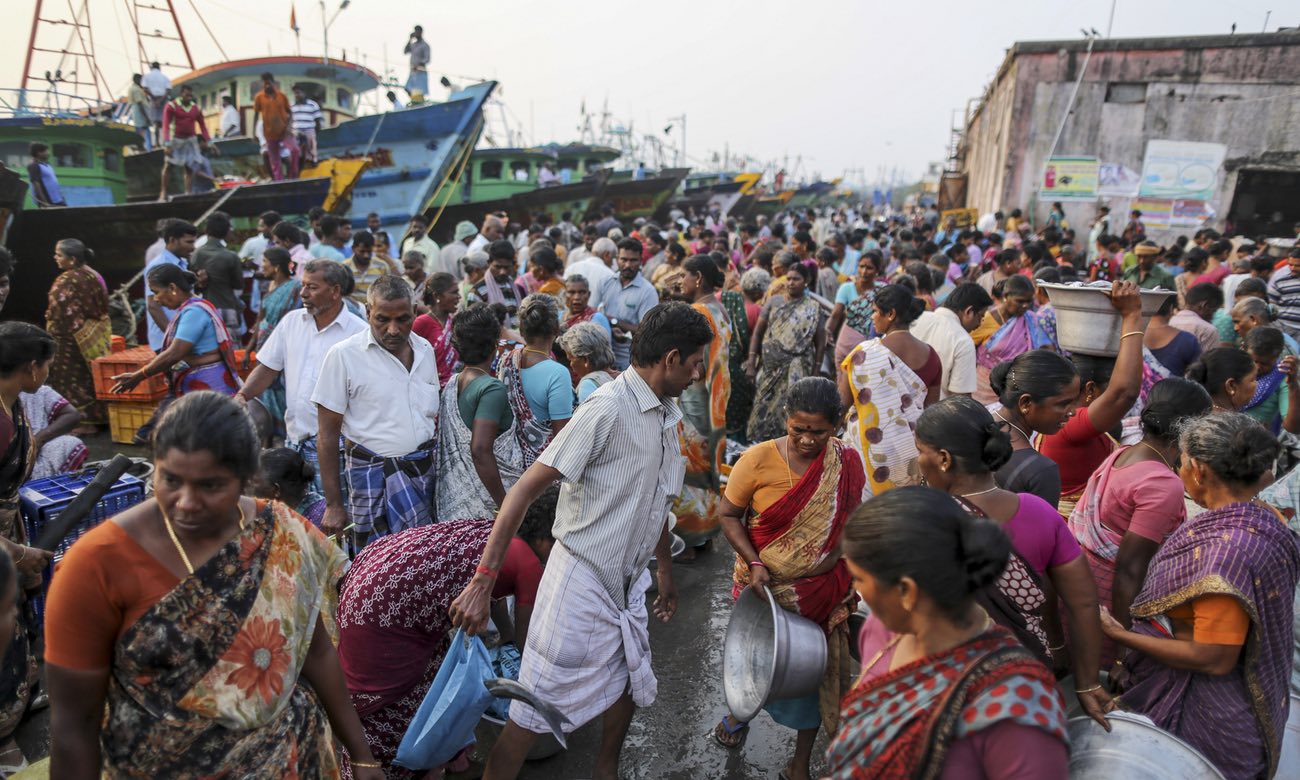 A fish market at Nagor harbour in Nagapattinam, Tamil Nadu, India. The bay can provide only a meagre living: 61% of fisherfolk live below the poverty line. Photograph: Dhiraj Singh/Bloomberg/Getty Images

The Bay of Bengal’s basin contains some of the most populous regions of the earth. No less than a quarter of the world’s population is concentrated in the eight countries that border the bay1. Approximately 200 million people live along the Bay of Bengal’s coasts and of these a major proportion are partially or wholly dependent on its fisheries2.

For the majority of those who depend on it, the Bay of Bengal can provide no more than a meagre living: 61% of India’s fisherfolk already live below the poverty line. Yet the numbers dependent on fisheries are only likely to grow in years to come, partly because of climate change. In southern India drought and water scarcity have already induced tens of thousands of farmers to join the fishing fleet3. Rising sea levels are also likely to drive many displaced people into the fishing industry.

But the fisheries of the Bay of Bengal have been under pressure for decades and are now severely depleted4. Many once-abundant species have all but disappeared. Particularly badly affected are the species at the top of the food chain. The bay was once feared by sailors for its man-eating sharks; they are now rare in these waters. Other apex predators like grouper, croaker and rays have also been badly hit. Catches now consist mainly of species like sardines, which are at the bottom of the marine food web5.

Good intentions have played no small part in creating the current situation. In the 1960s, western aid agencies encouraged the growth of trawling in India, so that fishermen could profit from the demand for prawns in foreign markets. This led to a “pink gold rush”, in which prawns were trawled with fine mesh nets that were dragged along the sea floor. But along with hauls of “pink gold” these nets also scooped up whole seafloor ecosystems as well as vulnerable species like turtles, dolphins, sea snakes, rays and sharks. These were once called bycatch, and were largely discarded. Today the collateral damage of the trawling industry is processed and sold to the fast-growing poultry and aquaculture industries of the region6. In effect, the processes that sustain the Bay of Bengal’s fisheries are being destroyed in order to produce dirt-cheap chicken feed and fish feed.

The aid that flowed in after the massive tsunami of 2004 also had certain unintended consequences7. It led to the modernisation and expansion of the small-scale fisheries sector, which generated an illusory boom followed by a bust. 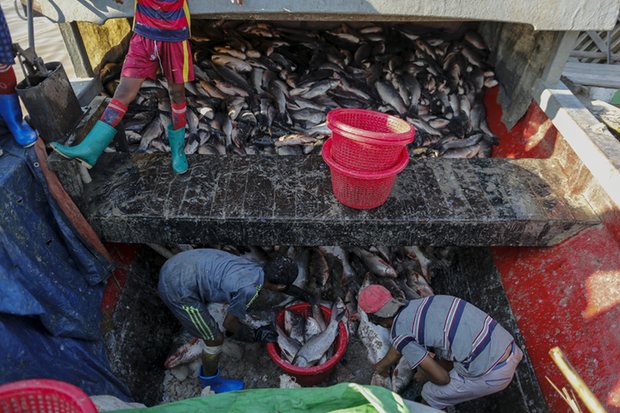 Children unload fish from a boat at San Pya fish market in Yangon, Myanmar. The opening up of the economy has triggered a demand for child labour. Photograph: Soe Zeya Tun/Reuters

In recent decades the governments of the nations that surround the Bay of Bengal have striven to expand and encourage their fisheries. But unfortunately these efforts have often ignored questions of long-term sustainability. Although attempts have been made to regulate fishing in the bay they have been largely ineffective.

In the 1980s and 90s, fisheries expanded into new grounds and began to target new species and for a while there was an increase in catches5. But catch rates began to decline in the late 1990s and trawlers were forced to move farther and farther from their home waters. This in turn has created a little-noticed grid of conflict. In 2015 Sri Lankan authorities claimed to have spotted 40,544 Indian trawlers in Sri Lanka’s territorial waters8. Seventy trawlers were seized and 450 fishermen were arrested. At least 100 deaths have been reported9. Conversely, many Sri Lankan tuna fishermen have also been arrested in India. On the other side of the subcontinent, large numbers of Indian fishermen are frequently arrested in Pakistan: 220 of them were released in December 2016, as a goodwill gesture.

In Myanmar, until a ban was enacted in 2014, the catch collected by foreign fishing boats was 100 times greater than that of local fishermen10. In the troubled Arakan region, where 43% of the population is dependent on fisheries, catches have declined so steeply that many families are mired in debt11. Conflicts over fisheries and other resources are a significant but largely unnoticed aspect of the explosive tensions of the region.

The Mergui archipelago on the Thai-Myanmar border is one of the more secluded parts of the Bay. In the late 19th century an English fisheries officer described this area as being “literally alive with fish”1. Today the archipelago’s sparsely populated islands remain pristinely beautiful while some of its underwater landscapes present scenes of utter devastation. Fish stocks have been decimated by methods that include cyanide poisoning. The region was once famous for its coral reefs; these have been ravaged by dynamite-fishing and climate-change induced bleaching.

Yet the exploitation of these waters continues without check. At night specially equipped, long-armed boats materialise around the islands and shine high-powered green lights into the water to attract plankton and the squid that follow in their wake. After nightfall, a glow that is bright enough to be visible from outer space12 hangs above the archipelago, like a miasmic fog. These squid boats, some of which are probably crewed by men who have been trafficked like slaves13, help to make Thailand the world’s largest exporter of squid – at least for the time being.
At the same time the bay’s ecosystems are also being disrupted by other environmental pressures. Several large rivers empty into the bay, carrying vast tides of untreated sewage, plastic, industrial waste and effluent from the agriculture and aquaculture industries14. The impact of this pollution could be catastrophic. The high load of organic pollutants, coupled with the diminution of the fish that keep them in control, could lead to massive plankton blooms, further reducing the water’s oxygen content.

Last month a multinational team of scientists reported an alarming finding – a very large “dead zone” has appeared in the bay. Apart from sulphur-oxidising bacteria and marine worms, few creatures can live in these oxygen-depleted waters15. This zone already spans some 60,000 sq km and appears to be growing16.

The dead zone of the Bay of Bengal is now at a point where a further reduction in its oxygen content could have the effect of stripping the water of nitrogen, a key nutrient. This transition could be triggered either by accretions of pollution or by changes in the monsoons, a predicted effect of global warming. 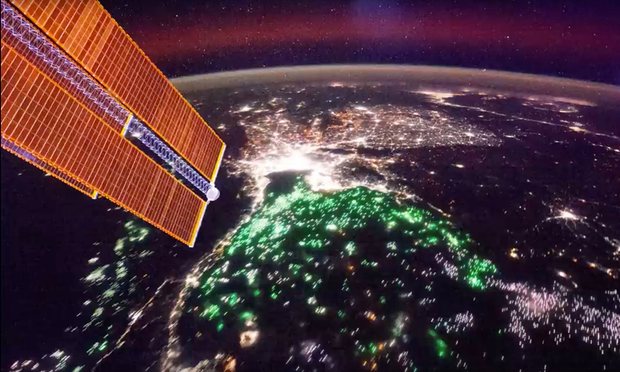 Green spots seen from the International Space Station are the lights of fishing boats used to attract squid across the Gulf of Thailand. Photograph: ISS/Nasa

What is unfolding in the bay is a catastrophic convergence of flawed policy, economic over-exploitation, unsustainable forms of waste management, and climate change impacts that are intensifying in unpredictable ways. The scientists who identified the bay’s dead zone warn that this stretch of ocean is approaching a tipping point that will have serious consequences for the planet’s oceans and the global nitrogen cycle.

Should the bay’s fisheries collapse there will also be very serious human consequences, including intensified conflict and mass displacement. If millions of people lose their livelihoods then we can be sure that the resultant churning of populations will create huge new streams of migration, across the bay, the Indian Ocean, and indeed, the planet. Recent refugee flows in the region suggest that such a process may have already begun.

For these issues to be addressed there needs to be a sea change in governmental attitudes and policies. For too long the governments of the region, often with international encouragement, have looked upon the sea as a bottomless resource pit to be despoiled at will. They need instead to view it as a wilderness that requires conservation and informed management, in consultation with the communities that are dependent on it. The situation demands carefully crafted solutions since it involves millions of livelihoods that are already imperilled by the dwindling of the bay’s resources.

• Amitav Ghosh is a novelist and non-fiction writer. His most recent book is The Great Derangement: Climate Change and the Unthinkable.

• Aaron Savio Lobo has a PhD in marine conservation from the University of Cambridge. He is currently a technical advisor for the Indo-German Biodiversity program of the GIZ (Deutsche Gesellschaft für Internationale Zusammenarbeit ) in India. The views and opinions expressed in this article do not necessarily reflect those of his organisation.