ASEAN Member States to present a united voice at COP22 on shared vision to address climate change impacts and drivers in agriculture.

“With the ASEAN Common Position, the ASEAN Ministers of Agriculture and Forestry have sent a clear message that agriculture, comprising crops, livestock, forestry, fisheries and aquaculture, is a top priority for action to address the impacts and drivers of climate change in ASEAN. I strongly believe the outcomes of this meeting will further advance the shared vision for tackling climate change in agriculture that is embodied in the common position and lead, not only to stronger coordination within and between ASEAN Member States in advance of COP22, but also in the future as move toward the commitment period for the Paris Agreement.”

Following on from the momentous decision of ASEAN Ministers of Agriculture and Forestry (AMAF) on October 2016 to adopt a common regional position on agriculture sector issues at the forthcoming 22nd Conference of Parties (COP22) to the United Nations Framework Convention on Climate Change (UNFCCC), representatives from ASEAN Ministries of Agriculture and Environment met in Bangkok on Friday 28th October to discuss how to coordinate to advance the Ministers’ shared vision to address climate change impacts and drivers in agriculture.

The meeting, which was facilitated by the ASEAN Climate Resilience Network (ASEAN-CRN) and supported by the Food and Agriculture Organization of the United Nations (FAO) Regional Office for Asia and the Pacific concluded with agreement on a number of important outcomes and next steps to advance the ASEAN Common Position on Issues Related to Agriculture for COP22 and Associated Bodies and Working Groups (ASEAN Common Position).

The participants identified key entry points to raise awareness of the ASEAN Common Position including specific preparation meetings ahead of COP22 such as the coordination meetings of the G77 and China group of negotiators of which ASEAN Member States are each a member. Participants also agreed on focal points from each country to lead efforts to coordinate and promote the ASEAN Common Position during COP22 and associated meetings and side events including the 45th Meeting of the Subsidiary Body for Scientific and Technological Advice (SBSTA45) and the 1st session of the Conference of the Parties serving as the meeting of the Parties to the Paris Agreement (CMA1).

All AMS are parties to the UNFCCC, and each developed and submitted Intended Nationally Determined Contributions (INDCs) in support of the Paris Agreement at COP 21. According to recent analysis conducted by FAO, priority actions for agriculture feature prominently in the INDCs submitted countries in the region.

The ASEAN Common Position draws upon the common priorities for agriculture identified by AMS in their respective INDCs. It also builds upon a regional submission prepared and submitted to special workshops on agriculture sector issues during the 44th Meeting of the Subsidiary Body for Scientific and Technological Advice (SBSTA44) in Bonn, in May 2016. The agreement of the Common Position at the 38th Meeting of ASEAN Agriculture Ministers of Agriculture and Forestry continues a long history of collaboration on agriculture sector issues in ASEAN including the recent development and endorsement of “ASEAN Regional Guidelines on Promoting Climate Smart Agriculture Practices”.  It further advances the implementation of the “Vision and Strategic Plan for ASEAN Cooperation in Food, Agriculture, and Forestry 2016-2025”. 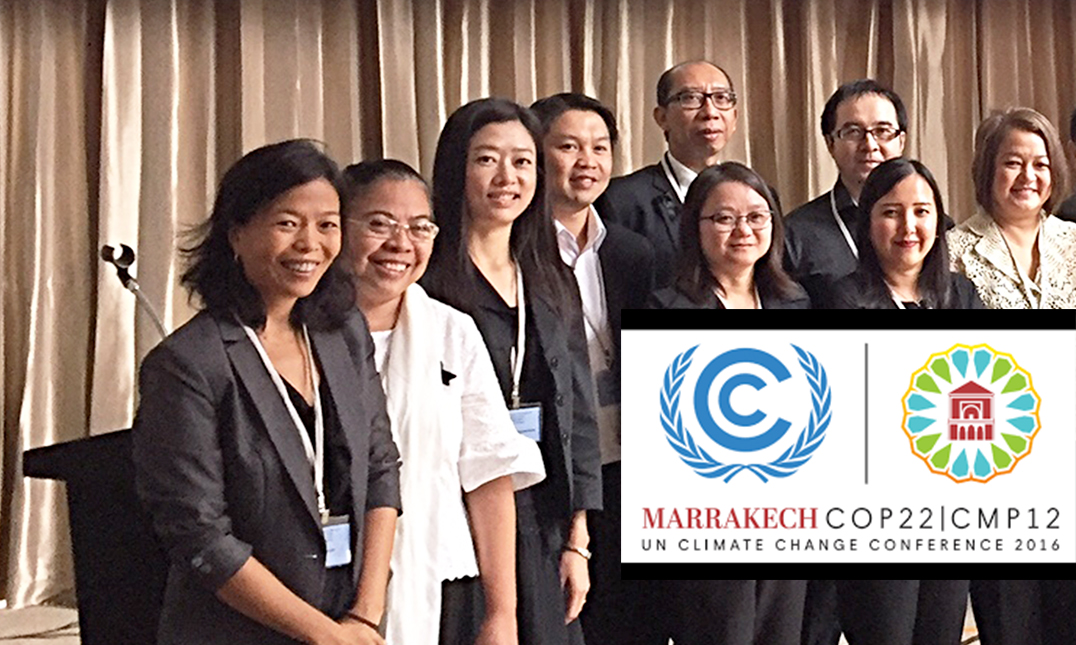 In their decision to adopt the Common Position, the ASEAN Ministers of Agriculture and Forestry appointed Thailand to lead coordination efforts ahead of COP22. The Chair of the Pre-COP22 meeting, Ms. Margaret Yoovatana from the Thai Department of Agriculture, believes that outcomes of the meeting bode well for the efforts of ASEAN Member States to draw attention to the crucial importance of the agriculture sectors in the context of global efforts to tackle the impacts and drivers of climate change.

To close the meeting the group agreed to continue to work together and coordinate more closely during 2017 to further advance common issues and areas of concern with respect to agriculture and climate change issues; particularly at COP23, which is likely to be organized in Asia.

Food and Agriculture Organization of the United Nations (FAO) is a specialized UN agency with a core mandate of achieving food security for all to make sure people have regular access to enough high-quality food to lead active, healthy lives.  Our three main goals are: the eradication of hunger, food insecurity and malnutrition; the elimination of poverty and the driving forward of economic and social progress for all; and, the sustainable management and utilization of natural resources, including land, water, air, climate and genetic resources for the benefit of present and future generations.

FAO as the leading UN agency in agriculture and food security is supporting its member countries to address the key issues facing the agriculture sectors under the impacts of climate change.  In the recently launched, State of Food and Agriculture (SOFA) on climate change, FAO identifies strategies, financing opportunities, and data and information needs, including transformative policies and institutions that can overcome barriers to implementation of the Nationally Determined Contributions (NDCs).

ASEAN Climate Resilience Network (ASEAN-CRN) is a platform for regional exchange on climate smart agriculture (CSA).  The ASEAN-CRN is established to ensure that ASEAN member states (AMS) are in a better position to adapt their agricultural sector to climate change and optimize its mitigation potential.  The network promotes climate resiliency through exchange of information, expertise, and experiences on CSA amongst the AMS.  The ASEAN-CRN links policy makers to scientific institutions, universities, national research institutions in agriculture, and international organizations.

The ASEAN-CRN is supported by the German Federal Ministry for Economic Cooperation and Development (BMZ) through the ASEAN-German Programme on Response to Climate Change in Agriculture and Forestry (GAP-CC). GAP-CC is implemented by the Deutsche Gesellschaft für Internationale Zusammenarbeit (GIZ) GmbH in close cooperation with the ASEAN Secretariat (ASEC).

ASEAN submission on agriculture and adaptation to SBSTA 44:
http://www.gapcc.org/2016/03/03/asean-submits-unprecedented-submission-to-unfcccs-sbsta-44-on-agriculture-and-adaptation/

The State of Food and Agriculture 2016, FAO:
http://www.fao.org/publications/sofa/sofa2016/en/