The ASEAN Secretariat celebrated ASEAN’s golden jubilee in Jakarta with a commemorative ceremony in the morning and colourful performances in the afternoon.

Secretary-General Minh highlighted the 50-year journey of ASEAN, its challenges and way forward. He said, “From a fledgling association, overcoming the challenges in the course of its evolution through a decades-long process of Community building, ASEAN has persevered and prospered over the past fifty years to become an indispensable player and major contributor to peace, security and prosperity in Southeast Asia and beyond.”

He added that “as ASEAN enters a new phase of its journey, it needs the continued support of its Member States, its peoples, Dialogue Partners and other stakeholders. ASEAN needs to stay the course and stand united to weather the current tide of complicated developments in regional and global situations…”

RI President Joko Widodo recognised that ASEAN has established a peaceful ecosystem, stability, and prosperity. ASEAN, however, continues to face challenges. He reminded that ASEAN should remain relevant for the peoples, not only benefitting large corporations but also small and medium enterprises, farmers, fishermen, and informal sectors. He also underlined the need to confront new, non-traditional security challenges that include terrorism and cross-border crimes. The President concluded that, “together with ASEAN, Indonesia progresses. Together with Indonesia, ASEAN is strong.” 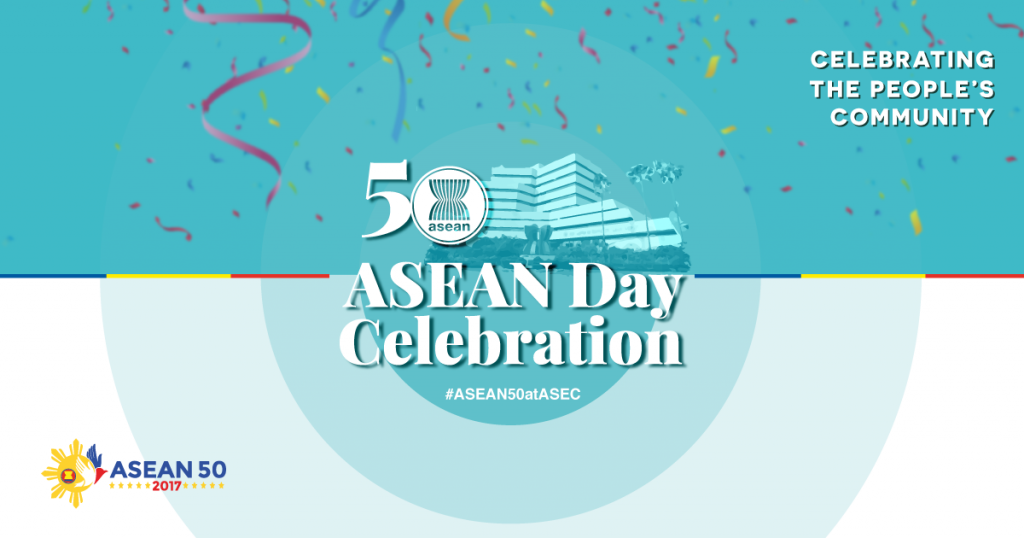 At the ceremony, President Joko Widodo also handed over land ownership certificate of the previous Jakarta Mayor’s Office to the Ministry of Foreign Affairs of Indonesia. The site is adjacent to the current ASEAN Secretariat building and designated for the Secretariat’s expansion.

The afternoon programme showcased the artistry of the ASEAN Community through cultural and musical performances by various artists from the ASEAN Member States. Guests also enjoyed exhibitions tracing ASEAN’s journey as a community and were entertained by ASEAN culinary provided by the ASEAN Women’s Circle, signature dishes of ASEAN Dialogue Partners, and other famed local dishes contributed by corporate entities.

ASEAN was founded in Bangkok, Thailand, on 8 August 1967 when the five founding fathers signed the ASEAN Declaration. The five original members are Indonesia, Malaysia, Philippines, Singapore and Thailand. Since then, ASEAN enlarged its membership with the admission of Brunei Darussalam, Cambodia, Lao PDR, Myanmar and Viet Nam.

On this occasion, the ASEAN Statistics Division (ASEANstats) of the ASEAN Secretariat joined in the celebration by launching three landmark publications. These are Celebrating ASEAN: 50 Years of Evolution and Progress, the ASEAN Statistical Report on Millennium Development Goals 2017, and the ASEAN Community Progress Monitoring System (ACPMS) 2017.

Celebrating ASEAN: 50 Years of Evolution and Progress presents an overview of ASEAN evolution and progress since its founding through a selection of key socio-economic indicators. The publication is organised into four key themes, namely economic progress, social progress, economic connectivity, and narrowing development gap. This publication is supported by the European Union Delegation through the EU-ASEAN COMPASS Project.

The ASEAN Statistical Report on Millennium Development Goals (MDGs) 2017 examines the progress and achievements of the ASEAN Member States with regards to the MDGs. The report provides estimates for the 25 MDG indicators every five years from 1990 to 2015, and compares the final change from 1990 to 2015 with the MDG targets. This publication is also supported by the European Union Delegation through the EU-ASEAN COMPASS Project.

Finally, the ASEAN Community Progress Monitoring System (ACPMS) 2017 Report is the third of the ACPMS report series which provides statistics on key integration outcomes in ASEAN. In this third report, the selection of indicators is aligned with the envisaged characteristics of the ASEAN Economic Community Blueprint 2025 and the ASEAN Socio-Cultural Community Blueprint 2025. The report contributes to and complements ASEAN’s broader integration monitoring framework. The ACPMS Report 2017 is supported by the Australian Government through the ASEAN-Australia Development Cooperation Program Phase II.

These publications are available at http://www.aseanstats.org/asean50/.